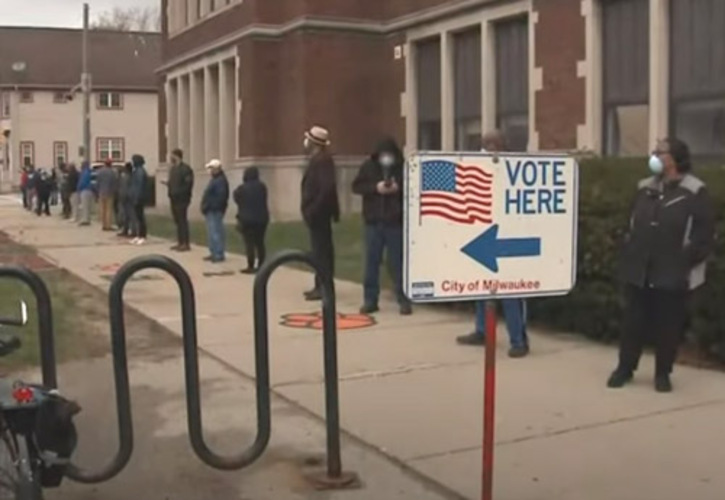 Gov. Tony Evers tried to postpone the April 7 vote but the Republican legislature challenged his order and the Wisconsin Supreme Court allowed the election to proceed.
wiscprimary by N/A is licensed under N/A
FPI / May 3, 2020

Democrats have seized on coronavirus fears to demand universal vote-by-mail, but data from the April 7 Wisconsin primary indicate those fears may be misplaced.

Of the more than 400,000 people who voted and the people who worked the polls in the Wisconsin primary, just 52 tested positive for COVID-19 and none have died. Wisconsin officials are not certain if any of the 52 contracted the virus at polling stations on Election Day.

The Wisconsin Department of Health said “several” of the individuals who appeared at the polls April 7 and have since tested positive “also reported other ways they may have been exposed to the virus.”

“Because of that, it’s unclear if those people contracted the virus at the polls,” the Associated Press reported.

Breitbart News noted: "At best, then, the infection rate amounts to approximately 0.013% of those who voted in person with a 0.00% fatality rate."

Department of Homeland Security Deputy Secretary Julie Willems Van Dijk said the state will stop asking individuals who test positive for the virus if they went to the polls after next week, as enough time has elapsed to cover the virus’s average incubation period.

“We’re getting to the point where the door will be closing on those,” she said.

Democrats had warned that an in-person election would jeopardize the health of Wisconsin residents. Gov. Tony Evers, a Democrat, had tried to postpone the vote but the Republican legislature challenged his order and the Wisconsin Supreme Court allowed the election to proceed as planned.

Hours after the Wisconsin Supreme Court's decision, the U.S. Supreme Court's conservative majority, in a 5-4 decision, blocked a lower court ruling that extended the deadline in Wisconsin for voters to submit absentee ballots, approving a request from Republicans in the state and the Republican National Committee to require ballots to be delivered or postmarked by April 7 in order to be counted.

House Speaker Nancy Pelosi, who is leading the charge to implement universal vote-by-mail, said of the high court's decision: "People should not have to decide whether they can vote or be sick. That's just not a good choice for anyone in a democracy. You have the Supreme Court of the United States undermining our democracy. It's really shameful. Five to four, surprise, surprise."

But, as the Wisconsin Department of Health noted, there is no evidence anyone got "sick" by voting in person or working the polls at the April 7 primary.

Wisconsin is scheduled to hold a special congressional election May 12. Voters can request absentee ballots until May 7.