Wikipedia changes the definition of ‘recession’ 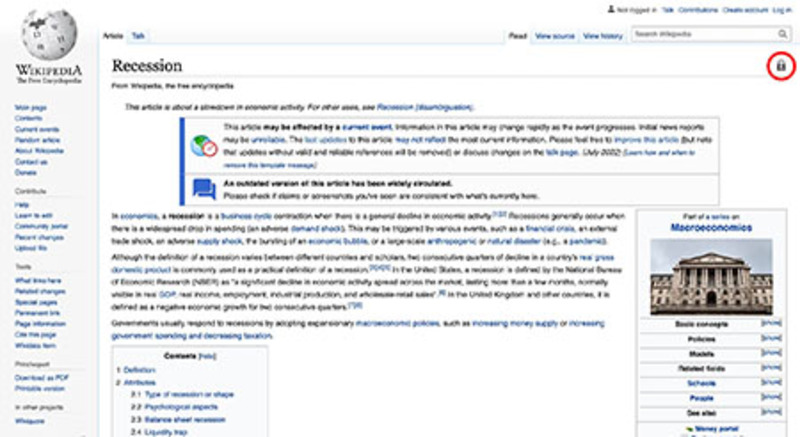 In response to apparently unwelcome economic news, supporters of Team Biden swooped in to change the definition of "recession" on Wikipedia, finally prompting the overlords at the so-called "online encyclopedia" to block users from revising the page.

The page was altered at least 47 times over a roughly 24-hour period, with an administrator locking unregistered users out until August.

Reports noted that a Wikipedia user known as “Soibangla” edited the “recession” page to remove references to the standard definition of the term — two consecutive quarters of negative growth. The user added a line which read: “There is no global consensus on the definition of a recession.”

"Some editors then tried to rebuke Soibangla's changes, only to then have another round of recession doubting editors change the article back to fit their ambiguous definitions," the Daily Mail noted.

As of Friday morning, the Wikipedia "recession" page included a lock icon in the upper right hand corner indicating that it was placed in “semi-protection” mode whereby “unregistered users…as well as accounts that are not confirmed or autoconfirmed” would not be able to make changes to the text.

The definition of "recession" is being disputed by Team Biden following the latest economic data showing a two-quarter drop in GDP.

Elon Musk, the Tesla CEO and the world’s richest person with an estimated net worth of $263 billion, tagged Wikipedia co-founder Jimmy Wales in a tweet on Friday: “Wikipedia is losing its objectivity.”

“Wikipedia changed the definition of recession to favor the Biden regime, and then locked the page,” tweeted right-leaning social media personality Mike Cernovich.

The Commerce Department report on Thursday indicated that the U.S. GDP fell by 0.9% in the last quarter. This is the second consecutive quarter that the national economy has contracted — which meets the traditional definition of a recession.

But the Biden administration has insisted that the economy is not in a recession. Treasury Secretary Janet Yellen told NBC’s Meet the Press on Sunday that the U.S. is "in a period of transition in which growth is slowing and that’s necessary and appropriate and we need to be growing at a steady and sustainable pace."

So, what's next for the Wikipedia change-the-meaning brigade? Perhaps, inflation?

As Breitbart's John Carney noted on Friday: "A key measure of inflation showed prices soaring by more than expected in June. The personal consumption expenditure price index rose by 6.8 percent compared with 12 months earlier, an acceleration of inflation from the 6.3 percent annual gain in May, according to data released Friday by the Bureau of Economic Analysis. Economists had expected a slightly lower reading of 6.6 percent. This is the biggest year-over-year gain since January of 1982."