'The Godfather' of gain-of-function: The Fauci emails

In February 2020, as the coronavirus was spreading from China across the world, Dr. Anthony Fauci had already begun to craft a narrative to divert attention from "gain-of-function" research that his agency funded and the Wuhan lab which may have created and released the virus, emails obtained under the Freedom of Information Act (FOIA) by The Washington Post and Buzzfeed News show.

Human Events editor Jack Posobiec noted in an Instagram post that the Biden administration is “discussing an exit strategy” for Fauci, the highest-paid federal employee, who has been praised as a "truth-teller" by Democrats and venerated by an adoring mega media matrix.

Along with the gain-of-function diversion tactics, the production of Fauci emails also show efforts to cover up the lab leak theory, disinformation on the asymptomatic spread of the virus, and knowledge of the effectiveness of hydroxychloroquine in treating Covid that was also covered up.

Gain of function research according to Wikipedia "is a term used to describe any field of medical research which alters an organism or disease in a way that increases pathogenesis, transmissibility, or host range (the types of hosts that a microorganism can infect".

According to Sky News host Sharri Markson, Fauci should be considered "the Godfather" of gain-of-function research after she uncovered a 2012 scientific paper of his that said the benefits of the research were worth the risk of a pandemic.

Fauci was informed in February 2020 that Covid-19 exhibited characteristics that suggested it could have been genetically altered in a lab, the emails show. (Telegram link to all released emails here.)

"It is an extraordinary acknowledgement; it is incomprehensible for a public health official, charged with protecting public health to take this position, but that's what he has done," Markson said. "These emails show that in the very early stages of the pandemic — in early 2020 — he became concerned that the finding for gain-of-function research in the U.S. had flown to Wuhan."

A flurry of emails also show that Fauci was "trying to find out whether he could be responsible or whether the NIH could be responsible for funding the research that might have created the virus that has leaked," Markson said, adding that it was "a real possibility" American funding under Fauci "funded a virus that might have leaked that has resulted in this global pandemic".

Fauci has repeatedly denied that any federal funding went to support gain-of-function research at the Wuhan Institute of Virology, but at least one major virologist has stated that funding supplied by Fauci's National Institute of Allergy and Infectious Diseases (NIAID) funded experiments at the Wuhan lab were then used in gain-of-function research.

Email from Fauci to Hugh Auchincloss, the NIAID Deputy Director, on Feb 1, 2020:

He attached a 2015 paper from Nature Medicine describing gain of function research on coronaviruses and told the NIAID Deputy Director:

"Hugh, it is essential that we speak this AM," "Read this paper... You will have tasks today that must be done."

In a later email that day Hugh responds to Fauci,

"The paper you sent me says the experiments were performed before the gain of function pause but have seen been reviewed and approved by NIH."

The paper to which Fauci refers in the email to Auchincloss was not available in the FOIA data production, but the attachment was visibly titled "Baric, Shi et al — Nature medicine - SARS Gain of Function." The title appears to be a reference to Ralph Baric and Shi Zhengli, two coronavirus scientists who have figured prominently in suspicions that the Wuhan lab may have played a role in the pandemic.

Fauci's email came several hours after he received a message from Kristian Andersen, an immunology professor at Scripps Research Institute, in which Andersen relayed assessments from both himself and several of his colleagues that the SARS-Cov-2 (Covid-19) virus looked "potentially" engineered. 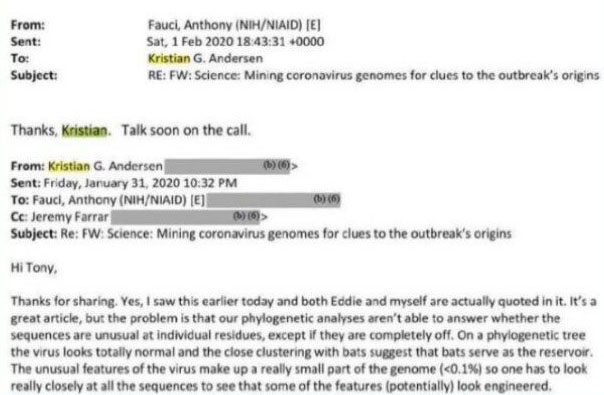 Andersen and several of his colleagues “all find the genome inconsistent with expectations from evolutionary theory,” Andersen wrote to Fauci, while acknowledging that there was “still further analyses to be done” on the matter before a determination could be made.

Up until last month, Fauci had publicly insisted that Covid jumped from animals to humans and had not escaped from a lab.

Kentucky Republican Sen. Rand Paul declared May 25 that Fauci committed perjury on May 12 over his gain-of-function comments related to communist China’s lab.

Paul was asked on Real America’s Voice, “Do you believe he [Fauci] perjured himself?”

“Absolutely,” Paul said. “He lied to the American people.”

Paul demanded May 26 that Fauci should be “made to testify under oath” about if the (NIAID) funded the Wuhan Institute of Virology’s gain-of function-research.

This is how the virus was created

A March 11, 2020 email from Adam Gaertner to Fauci was sent under the heading: “Subject: Coronavirus bioweapon production method."

Gaertner writes: "Hello Anthony, This is how the virus was created.”

On April 18, 2020, Peter Daszak, the president of Wuhan Lab funder EcoHealth Alliance, emailed Fauci to thank him for dismissing the lab leak theory.

Daszak not only funded the gain-of-function research at the Wuhan lab, but was also one of the lead investigators sent by the World Health Organization to investigate the lab.

Daszak writes: “As the Pl of the ROl grant publicly targeted by Fox News reporters at the Presidential press briefing last night, I just wanted to say a personal thank you on behalf of our staff and collaborators, for publicly standing up and stating that the scientific evidence supports a natural origin for COVID-19 from a bat-to-human spillover, not a lab release from the Wuhan Institute of Virology.

“From my perspective, your comments are brave, and coming from your trusted voice, will help dispel the myths being spun around the virus’ origins. Once this pandemic’s over I look forward thanking you in person and let you know how important your comments are to us all.”

Asymptomatic was a lie

Following Fauci's comment, Lew Kaplan, president of SCCM, told Medscape Medical News: "That really supports the universal wearing of masks and the capstone message from that — you should protect one another."

But a Fauci email from February 2020 shows that the asymptomatic comment was a lie. 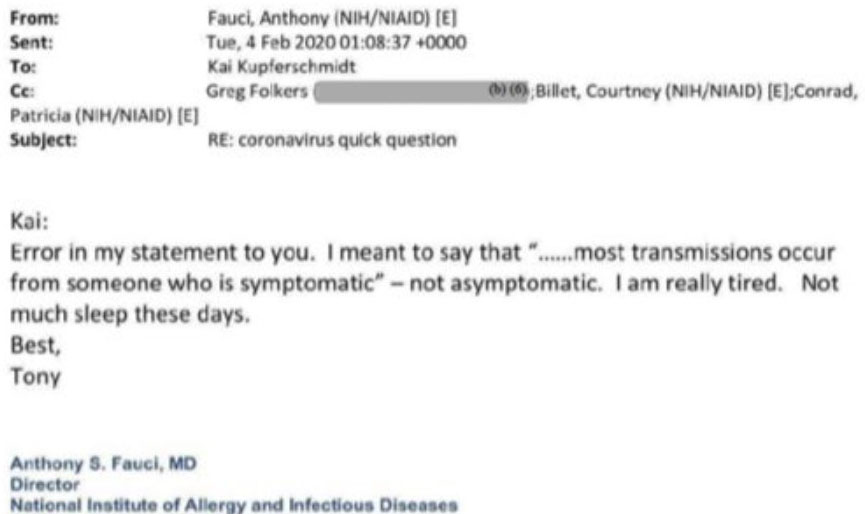 In a March 2020 email, physicist Erik Nielsen speaks about recommended treatments to battle Covid. One of the drugs was hydroxychloroquine.

"Fauci supported the grotesque and dangerous experiments that appeared to have made Covid possible," Carlson said.

Fauci's emails, Carlson said, collectively show that "from the beginning, Tony Fauci was worried that the public might conclude Covid had originated at the Wuhan Institute of Virology."

"Why would he be concerned that Americans would conclude that?" Carlson asked. "Possibly because Tony Fauci knew that he had funded gain-of-function experiments at that very same laboratory."

Obama, elites equate ‘democracy’ only with themselves
Opinion

Leftist gold mine: A month at the Gates Foundation
Opinion