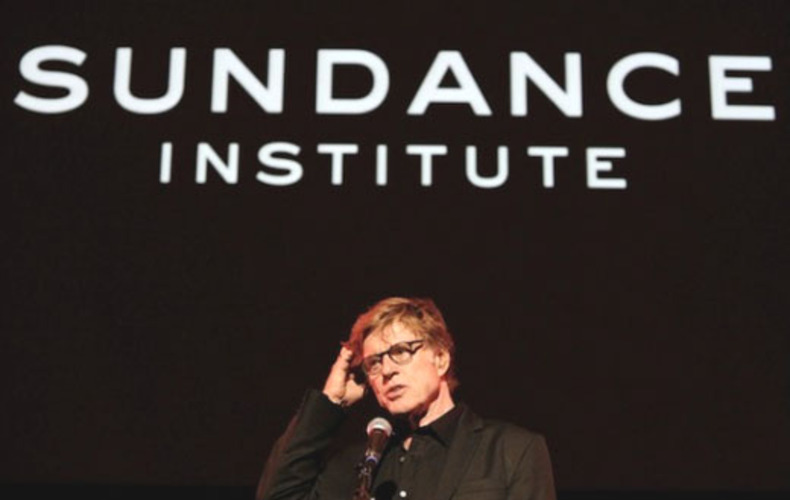 Robert Redford
sundnce by N/A is licensed under N/A

Meet the identity politics dullards who have helped to ruin the movies.

At age 83, Robert Redford may still hint at the handsome face that harkens back to better days in Hollywood, when the industry could make films of actual quality. But his Sundance Institute is at the very forefront of the PC crapulence that passes for moviemaking today.

Strangled by gender and racial identity politics, Sundance leads the way for social justice-infused storytelling that inevitably loses all claims to art. Not that Redford and his preening well-to-do leftists grasp this for a second. They no doubt still delude themselves with the notion that they are crafting timeless works of excellence while sharing "important" messages instead of offering up insta-stale emotional appeals to progressive posturings of the moment.

Pat Mitchell is Chair of the Sundance Board of Trustees. In a February article titled "Reflections on Sundance 2020: 'Imagining the Future'" written for the leftist "wellness" website Thrive Global, Mitchell gives the cultural-leveling game away. She writes:

This year's festival reflected the strategic focus on making all of Sundance Institute's programs — from labs for screenwriters, directors and producers to the festival — more inclusive. This year, SFF almost achieved parity with 46 percent women-directed or co-directed films. Thirty-eight percent of the competition film directors were people of color and 12 percent LGBTQ+. The U.S. Documentary Competition’s directors included 45 percent women, 23 percent people of color and 23 percent LGBTQ+.

It sounds like they are measuring it all on a scale, obsessing over each ounce and dollop of color, gender and sexual "orientation." This is art? Well, Mitchell goes on to explain that, writing of a Sundance-featured documentary extolling the praises of a progressive philanthropist (bold added):

Another true icon of thought leadership in the art and philanthropic world, Aggie Gund, is the subject of a documentary directed by her daughter, Catherine Gund. The film is a compelling look at how Agnes (“Aggie“) used her wealth to encourage others to see the connection between art and social justice and documents the founding of her nonprofit initiative — the Art for Justice Fund.

Hillary Clinton is fawned over as well by Mitchell. Writing of the failed 2016 presidential candidate's appearance as a speaker at the "Women of Sundance Celebration" at the 2020 Sundance Film Festival, Mitchell notes that "Hillary addressed the extraordinary cultural moment in which we find ourselves and observed that 'there is nothing more important than telling stories that not only lift up and describe the diverse extraordinary lives that Sundance filmmakers represent and are introducing the rest of us to, but to recognize that what you are doing is so fundamentally political at this moment.'"

Along with her lofty board position at Sundance, Mitchell, a committed feminist, has primo globalist elitist ties. According to her Thrive Global bio, "[i]n 2017, she launched the Transformational Change Leadership Initiative with the Rockefeller Foundation focused on women leaders in government and civil society." The bio also states that she is "a member of the Council on Foreign Relations."

She celebrates the fact that Planned Parenthood would be opening reproductive health centers at 50 Los Angeles high schools on her official Twitter site.

This is hardly the extent of the Redford's organization's cozy ties to the abortion retail giant. A Sundance "Partner Panel" in January was actually "presented by Planned Parenthood." It openly touts the media-friendly PP propaganda machine as worthy subject material. "Many people learn about sexual and reproductive health and rights through entertainment media — that’s why authentic storytelling in film and television is more important than ever," a description of the panel on the Sundance website reads.

Sundance Executive Director Keri Putnam is another rabid progressive posing as a producer of art. At the 2017 Sundance Awards she bashed the Trump administration over its efforts to limit entrance into the U.S. to foreigners from terror-sponsoring nations. "I want to take a moment to acknowledge the artists and documentary subjects who are from Muslim-majority countries who joined us at this year’s festival to share their work,” she said, hiding under the "creative" fig leaf once again. "We know that closing our borders to these and other international artists stops the flow of ideas and inspiration that are so vital to the global community. We stand with you, and we stand with all people risking their lives for their values or seeking refuge from violence or persecution who are now denied entry to our country."

An even more wild-eyed look for Redford's operation came at the 2017 Women's March in Park City, Utah. Being that Park City is home to the Sundance Festival, the event was basically a Sundance event. A Deadline report at the time captures the "artistic" silliness of it all. "Among the marchers seen going down Main were Sundance festival director John Cooper, Sundance Institute boss Keri Putnam, Sundance Producers President Laura Michalchyshyn, producer Jason Blum, members of the cast of Underground and WME’s Marie Sheeny," Deadline noted. It then described some of the wonderful content at this oh-so-vital march. "Initiated by [comedian Chelsea] Handler, a number of speakers addressed the protestors including Maria Bello and Jessica Williams. 'Hello all you pussies!' said the Goliath actor in her opening remarks to the rally crowd. 'When they punch you in the pussy, punch 'em back with your pussy power,'" Bello added. Lovely. These are the modern sculptors of film art?

A glance through Sundance's 2019 annual report reveals a smorgasbord of cultural Marxism, mostly under the familiar rubric of "diversity and inclusion." A quote from founding legend Redford is featured prominently, which is only proper given the wizened-sage persona he has long wallowed in among narrow progressive entertainment circles. "Cinema, both fiction and nonfiction, has shown over and over that as human beings, we share values beyond any border, real or imagined."

That's not homey phrasing, folks. It's an agenda.

The agenda is soon further outlined. A "Festival Spotlight" from the 2019 Women at Sundance Celebration sings the praises of rabble-rousing leftist Rep. Alexandria Ocasio-Cortez (D-NY):

One of the most empowering events of the Festival was the annual Women at Sundance Celebration, which convened over 800 women filmmakers, industry leaders, and supporters. Congressmember Alexandria Ocasio-Cortez, subject of Rachel Lears’s Knock Down the House, offered a rallying call to the group via Skype.

"It's so important that we, as women, as working people, as people of color, begin to not only be in front of lenses but to also be part of the process behind them – we need to be telling our own story,” Ocasio-Cortez said. "The potential of our storytelling is a major part of the potential of our nation." Knock Down the House, which followed Ocasio-Cortez, along with three other trailblazing women who redefined American politics during the 2018 midterm elections, won the audience-selected Festival Favorite Award and was acquired by Netflix in the biggest sale ever brokered for a documentary at a film festival.

This is nothing but pure partisan politics. Which of course is where the deliberately misleading and malevolent "connection between art and social justice" always ends up. Yet a giant entertainment company, Netflix, gets to pretend it is spending its money on a documentary made in good faith rather than backing rabid ideological activism.

There's more. "Project Spotlight: Traveling While Black" ludicrously asserts that blacks in America today need a new Underground Railroad just to walk around safely in our country today. A segment in the annual report titled "A Silenced Voice" mourns the detention and eventual deportation of an illegal alien who just so happened to appear in yet another Sundance-featured "documentary." This "artistic" moment apparently puts him above U.S. immigration laws in the minds of these delusional boutique progressives.

With all we've detailed, it should be no surprise to find the dark hand of globalist billionaire George Soros behind Redford's bogus venture. In 2009 Soros's Open Society Foundations gave Sundance a whopping $5 million grant "for its Documentary Film Program to help raise awareness on human rights."

Open Society Foundations is featured on the 2019 Sundance Annual Report list of financial supporters in the Foundations - $1,000,000 and Above Category.

Among corporations, Acura is listed as a "Presenting Sponsor" of the 2019 Sundance Film Festival. "Leadership sponsors" include Adobe, Amazon Studios, AT&T, DirecTV and Stella Artois beer.

"Media Sponsors" to the 2019 festival included the Los Angeles Times, The New York Times, Variety and the Wall Street Journal.

It's easy to laugh off Hollywood leftists and their fellow orbiters as out-of-touch elitists adrift in their own lost world. But the name Robert Redford remains a powerful brand in the globalist world we live in today, and the octogenarian actor has tapped into a powerful network of corporate, philanthropic and media allies to help thoroughly warp an important sector of our cultural life. Even if you wave away the heavy-handed propaganda of organizations such as Sundance, the serious damage they do simply by diminishing true art should not be underestimated.

Joe Schaeffer is the former Managing Editor of The Washington Times National Weekly Edition. His columns appear at WorldTribune.com, LibertyNation.com and FreePressInternational.org.