A few questions about 'the emperor’s new clothes'

I staunchly support our United States Constitution and it’s first ten amendments, the Bill of Rights that bestow on all of our citizens certain inalienable rights. Those include Freedom of Speech and leeway to practice the religion of our choice.

Until today, these rights were not in dispute. Our citizens could exercise them without retribution. This truth represented the very essence of what it meant to be an American.

What happened? This is the first of several urgent questions that have defied answers.

Today our United States is being destroyed from within and without by those with varied motives. Some are outright enemies; Others not. But they aspire to the same goal: Transforming our democracy into something unimaginable to my ancestors.

I grew up in a patriotic, God-fearing family where two of my grandparents didn’t go to school and the other two grandparents finished the third and fourth grade respectively. Also, I was raised into a family where eighteen of my relatives were killed in coal mine accidents and one was murdered on his front porch during a union/management mine war. Second cousin fighter pilot Joe Green, an American hero, walked out of a high school assembly at Stonewall Jackson High School after Dec. 7, 1941, and the cowardly Japanese attack on Pearl Harbor. Joe Green volunteered for the Army Air Corps flight cadet program.  He flew all day from southern England on June 6, 1944, the “Day of Days" over Nazi-occupied Normandy. Joe Green made the ultimate sacrifice and didn't see the end of World War II.

I have been blessed with some notable and impactful ancestors including Daniel Boone, Cherokee Chieftain John Ross who led his Cherokee tribe from their grounds in the southeast United States to eastern Oklahoma, one of the founders of the Republic of Texas Benjamin Rush Milam who lost his life winning Texas independence and Confederate Lt. Gen. Ambrose Powell Hill, Jr, a graduate of West Point who was not a slaveholder and in fact abhorred slavery. He was a Virginian like the General of the Confederacy Robert E. Lee.  Gen. Hill served valiantly but didn’t see the end of the American Civil War.

My relatives were universally military men, and I was destined to serve in our United States military as well.  My first real career was a five-year stint serving in the United States Air Force where I successfully completed two combat flying tours over Vietnam while stationed with two Tactical Fighter Wings, both located in Thailand.

I love our country and am patriotic despite reading that “patriotic” is not an acceptable adjective these days. Maybe that comes from our uber-politicized FBI. Or maybe other government acronyms like the NSA, CIA (that sought to recruit me twice) or the DOJ, to name just a few three lettered agencies filled with bureaucratic operatives too often presuming to reign over our American citizenry. 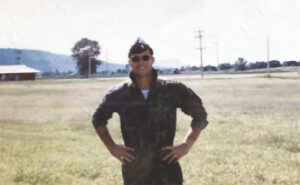 When I think of the FBI, I remember after the fact reading about the Saudi terrorists who spent months relaxing while casually learning to fly airplanes in Florida and then hijacking commercial airliners and killing approximately 3000 American citizens during the September 11, 2000 terrorist attack.

(Photo: John McNabb, in 1969, with the 355th Tactical Fighter
Wing at the Takhli Royal Thai Air Force Base. / John McNabb)

When I think of the FBI, I remember after the fact reading about the Saudi terrorists who spent months relaxing while casually learning to fly airplanes in Florida and then hijacking commercial airliners and killing approximately 3000 American citizens during the September 11, 2000 terrorist attack.

More questions: Where was the FBI? And why weren’t our government intelligence entities cooperating with critical information? And why is the FBI harassing folks from the January 6 event where only American citizen protesters were murdered?

I wasn’t in D.C. on January 6. I only know what I have read and seen on TV. But I vividly recall making my way to the 2017 Presidential Inaugural Ball and witnessing Antifa violence, the building and vehicle fires, the looting and the pathetic attempt by the Washington D.C. Police to maintain order.

I simply don’t know anyone who doesn’t love our country. And I hold that the only way to change the direction of our country is to legally elect men and women who love our Republic and believe in the tenants of our founding fathers. But here are a few suggestions:
Our Senile CEO

Sadly, we are at a point in our nation’s history where we have our first incompetent Chief Executive Officer (CEO) the senile President Sleepy Joe Biden. Anyone can watch our president and come to the same conclusion.

President Biden is a career politician who has never run anything but his mouth: Not the resume needed for the the Leader of the Free World. His continued foreign policies failures also place our American citizens in constant danger. The result of his lack of leadership is also keenly felt here at home: Our current runaway inflation and runaway crime are damaging all Americans. Finally, consider the Biden Administration’s Open Southern Border policy. America, we don’t know who is in our country! And this is putting all of our citizens at risk.

The Biden administration has been an unmitigated disaster from Day One to which I have not seen the equal. And never more apparent than his totalitarian handling of the Chinese Communist-developed COVID strains racing across America.

And now back to story time:

Hans Christian Andersen was a Danish author and story-teller who wrote children’s fairy tales, one of which was The Emperor’s New Clothes. As the story goes two swindlers arrive in a kingdom and convince the king and his court that they can create magical threads that only proper, acceptable people would be able to see. The classic peer pressure play. Thus, one who cannot see the beautiful clothing produced for the king would not be acceptable in proper society and be shunned and banished. So, the magical garments were produced for the king and he paraded in public as if he were dressed instead of the reality that he was parading around nude.  The king’s subjects played along because no one wanted the consequences of not being a proper citizen. Until one day during a parade a small child saw the king and yelled out the king has no clothes. Truth met reality.

Our country’s year-long tragicomedy is no fairy tale: America is witnessing for all to see a stumbling, bumbling figurehead (or the Hans Christian Andersen equivalent to the King parading around with his special garments).

How, I wonder, did a guy who’s spent very little of his life outside of political Washington D. C. and again has never really run anything but his mouth, amassed a fortune from public service? This is a man, remember, who married his babysitter and has allowed the seediness in his family to continue with his son Hunter as only one example. Mind you I don’t know the Bidens and don’t have any interest in doing so. I know what I read even as the discredited mainstream media has attempted to cover up for the first family and this administration.

Just two final quick questions. How did Sleepy Joe get elected? And who is running our country?

John T. McNabb , author of 'A Nice Ride: Stories of America,' is co-founder of the Trump Leadership Council and former chairman and CEO of Willbros Group. He also serves as chairman of the Free Press Foundation Advisory Board.

Next Putin move: From chess to 'nuclear catastrophe'?
Opinion

Romulus Report: The scene of the crime
Opinion

63 million abortions in 49 years; Not in Constitution
Opinion