Lake vows to 'make it easy to vote ... impossible to cheat'

After defeating the old guard Republican establishment in the Arizona GOP gubernatorial primary, America First candidate Kari Lake said she was "not satisfied" with the integrity of the primary vote and vowed that what happened on Tuesday, and in the 2020 election in Arizona, would not happen on her watch if she wins the statehouse.

"I am not satisfied with how the election was run. We had major issues yesterday, major issues, and they’re being reported by everyday voters," Lake, who is backed by former President Donald Trump, said in a statement on Wednesday.

"We’ve got to get our elections reformed, so that every Arizonan, whether they be Democrat, Independent or Republican, when they go to bed on election night, they know the winner, and they’re satisfied that it was a fair election. We don’t have that right now. And that’s why this was an issue that I ran on, and I intend to work with our lawmakers. The legislature, they’re the ones who write the the laws for elections, and we’re going to shore up our election laws so that every Arizonan knows that every legal vote counts, and we’re gonna make it easy to vote and impossible to cheat."

The winner of Tuesday's GOP gubernatorial primary, as Lake said, was not decided on election night. It took nearly two more days before Lake was declared the winner over Karrin Taylor Robson, a property developer who had won endorsements from former Vice President Mike Pence and sitting Republican Gov. Doug Ducey.

The Gateway Pundit reported that Maricopa County stopped counting ballots on election night after Lake took the lead statewide. Lake was finally declared the winner at 7 p.m. on Thursday.

The report noted that Maricopa was "hiding the counting procedure with fences covered in tarps."

Maricopa resumed counting on Wednesday, "leaving voters wondering what the hell is going on and why the State and its Leftwing media refuse to call the race for Kari," Gateway Pundit's Jordan Conradson noted.

They resumed the next day, leaving voters wondering what the hell is going on and why the State and its Leftwing media refuse to call the race for Kari.

Corporate media hacks seem astonished that candidates who supported Trump's contesting of the 2020 election (which media lefties continue to refer to as the "Big Lie") are winning primaries.

Some in the legacy media were quick to pint out that many Republicans who support Trump’s claims of widespread 2020 election fraud are advancing to positions where they could influence running future elections if voters put them in office this fall.

Mark Finchem, a state House representative, won a crowded primary for the GOP’s secretary of state nomination in Arizona. As is the case in many states, duties of the post include overseeing the election process.

Finchem, who has Trump’s backing, wants to eliminate early voting and is suing in federal court to block the use of vote-counting machines in Arizona.

Arizona Republicans picked former county prosecutor Abraham Hamadeh, a Trump-backed candidate who has claimed “evidence of a rigged 2020 election,” as their nominee for state attorney general.

The Associated Press called the race in Gibbs' favor with 51.9% of votes compared to Meijer's 48.1%.

Trump endorsed Gibbs in November 2021, calling Meijer a "RINO" who "has been a terrible representative of the Republican Party."

Before his campaign, Gibbs served as a Trump appointee at the Department of Housing and Urban Development.

"Just got a call from President Trump, congratulating me and my team on tonight’s big win! Thank you, Mr. President for your support!" Gibbs posted on Twitter after beating Meijer.

Gibbs now faces Democrat Hillary Scholten, a former Department of Justice attorney, this fall. Scholten lost to Meijer in 2020 by more than 6 percent.

On one side of this photo, you’ve got the Fake Corporate Press fuming over our win

On the other side, you’ve got Moms standing behind our Movement to protect our Nation’s most precious resource: our Children. I know who’s side I’m on. What about you? pic.twitter.com/RFhnFmQhJy — Kari Lake for AZ Governor (@KariLake) August 4, 2022 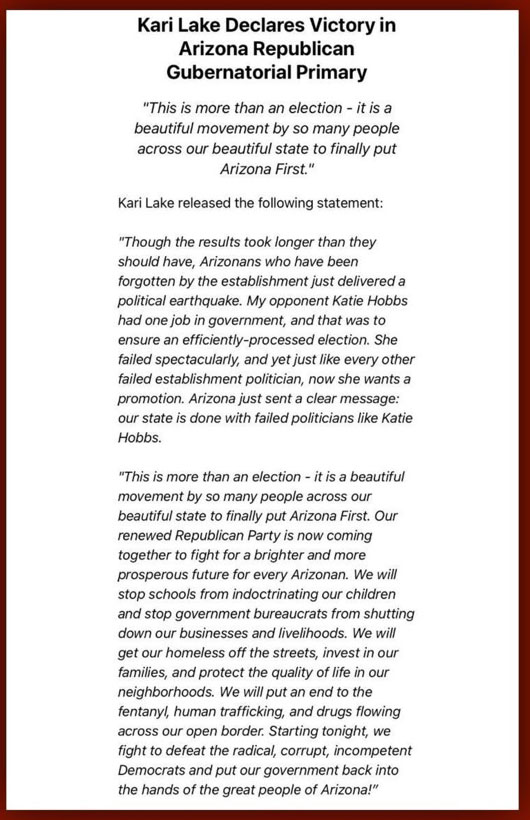