In doubt: WaPo 'report' on nuclear documents at Mar-a-Largo 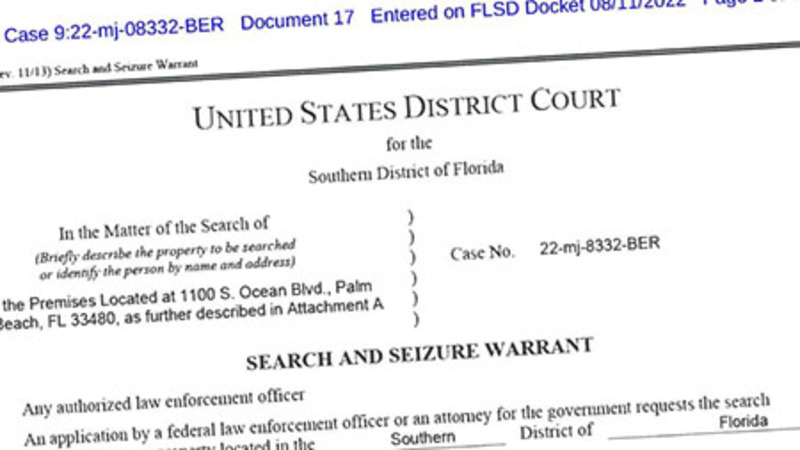 Did The Washington Post mislead readers about President Donald Trump absconding with secret documents related to the U.S. nuclear arsenal?

Newly released documents related to the FBI’s raid of Trump’s Mar-a-Lago residence in Florida do not explicitly mention nuclear weapons secrets, which The Washington Post reported agents were seeking.

On Friday, the U.S. District Court for the Southern District of Florida, from which the warrant for the raid was issued, unsealed unredacted copies of the FBI search warrant and receipts of items taken from Mar-a-Lago on Monday.

The documents released Friday avoid specifics for the most part. They do not refer to nuclear weapons.

The documents do refer to “top secret” information and say Trump is being investigated in part for potential violations of 18 U.S.C. section 793. This section of the U.S. code deals with “obtaining information respecting the national defense with intent or reason to believe that the information is to be used to the injury of the United States, or to the advantage of any foreign nation.”

One of the documents, attachment B, refers to “information, including communications in any form, regarding the retrieval, storage, or transmission of national defense information or classified material.”

On Thursday, the Washington Post reported that the FBI sought to recover from Trump's residence “classified documents relating to nuclear weapons.” WaPo’s sources, which the outlet referred to as “people familiar with the investigation,” did not elaborate on the claim, nor did they say whether the FBI recovered such documents.

Daily Wire Editor Emeritus Ben Shapiro tweeted: “Just to get this straight, we’re now supposed to believe that the material Trump had stored in his house was nuclear content so sensitive the FBI waited a year and a half to go get it and used the National Archives as a prop to do so?”

Politico's Playbook on Friday noted that anonymously sourced reports on Trump are often exaggerated or false: “There were few other nuke details in the piece, and we’ve seen enough Trump scandals in the last seven years to know that sometimes potentially explosive allegations from anonymous sources fail to detonate. But Trump himself was conspicuously quiet about the story.”

The Washington Post will not return the Pulitzer Prize it was awarded for knowingly reporting bogus information on the Trump-Russia investigation. With that in mind, a retraction, correction, or clarification on Thursday's "report" is not expected.