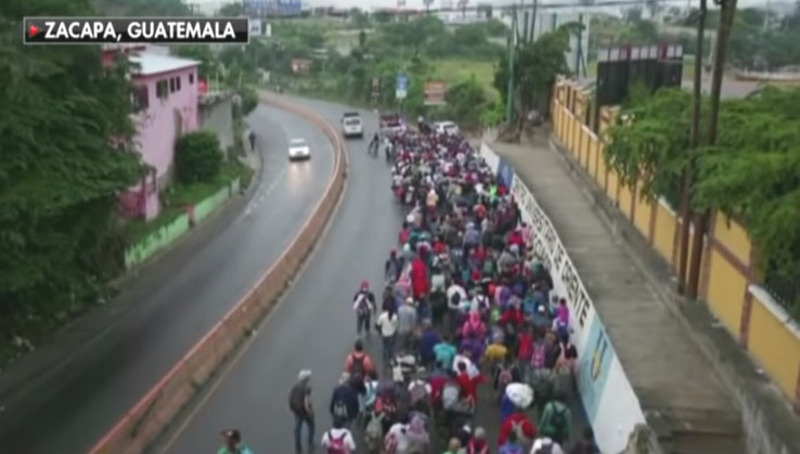 Migrant caravans sent to the U.S. are 'political weapons' used by leftists, a Guatemalan official said.
guatmig2 by N/A is licensed under N/A
FPI / August 29, 2019

Unemployment and poverty resulting from a failed “socialist corrupt ideology” imposed on Guatemala by U.S. Democrats is the real catalyst of the ongoing migrant crisis, a Guatemalan government official said.

“It goes back to the policies of failure that people have tried to impose on Guatemala. I’m talking about … Democrats in the U.S. government, certain European countries, and even the UN,” Mario Duarte, Guatemala’s secretary of strategic intelligence, said in an Aug. 27 interview on SiriusXM’s Breitbart News Tonight.

“So we have socialist-oriented magistrates in the Constitutional Court forcing big companies [and] big businesses to shut down and lay off a lot of people, people with big families. These people have to eat and they have to survive, so they will look for an opportunity somewhere else.”

Last month, the U.S. and Guatemala signed a deal in which migrants from El Salvador and Honduras who pass through Guatemala would be required to stop and seek asylum there first. Migrants who failed to do so would then be ineligible for asylum in the U.S.

The Guatemalan government says the agreement will last for two years and will be reviewed every three months.

In the Breitbart interview, Duarte explained his assessment of Democrats’ policies adversely affecting Guatemala: “What am I talking about? To give you an example, we have had, in the past, State Department officials identifying themselves as Democrats. On the day that President Trump was elected, those officials ultimately pushed for specific judges to be appointed to our highest courts in Guatemala — the Constitutional Court.”

Duarte continued: “And what happens when these magistrates or judges were appointed? They started with all these social justice warriors. [They] took away a lot of the rights of companies to be able to run their businesses in a fair way, and they even affected U.S. companies.”

“[One company]…. lost hundreds of millions of dollars because these socialist magistrates on the Constitutional Court that were put there — forced there — by Democrats in the State Department here in Guatemala. Now you have all these companies closing down here, and all these people that are unemployed, they have to go somewhere to survive.”

Migrant caravans sent to the U.S. are “political weapons” used by leftists — both in the U.S. and abroad — to undermine American sovereignty, Duarte said.

“That’s not an organic caravan,” said Duarte. “That’s not simply happening because we are out of jobs. Those were actually provoked caravans. It is the weaponizing of those who live in our country. They have been used as political weapons [against] the border of the United States.”

Migrant caravans were organized “by several United States NGOs,” Duarte noted, “some of them in California and some of them in Chicago.” Left-wing U.S.-based NGOs “work with local NGOs in Guatemala and El Salvador to facilitate the movement of all these people to the United States.”

The leftist judges in Guatemala, Duarte said, “are the same magistrates, so you know, who are right now ruling against President Morales, and are trying to block him from signing this migration cooperation agreement with President Trump. The same people that have shut down all these companies are also trying to block these agreements.”

Duarte stressed: “What we need in Guatemala is not foreign aid. What we need is investment. We need companies to come in here, but we also need our judicial system to be left alone, because we are a capitalist country, in the end.”