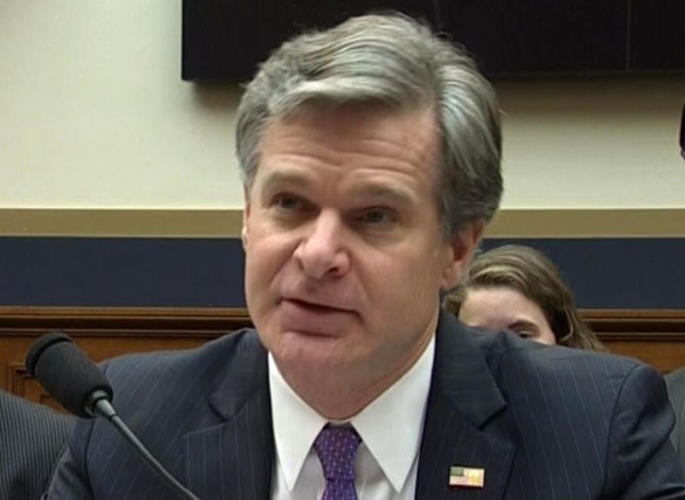 FBI Director Christopher Wray
chriswray by N/A is licensed under C-SPAN
FPI / May 7, 2020

The House Judiciary Committee has questioned the straightforwardness of  FBI Director Christopher Wray and is calling on him "immediately review the actions of the FBI" in its targeting of former national security adviser Michael Flynn.

Internal FBI documents unsealed on April 29 show that top bureau officials said their motivation for interviewing Flynn in the White House in January 2017 was “to get him to lie, so we can prosecute him or get him fired.”

The notes further suggested that agents, if they were unable to coax Flynn into lying, planned to get Flynn “to admit to breaking the Logan Act” when he spoke to then-Russian Ambassador Sergey Kislyak during the presidential transition period.

"The American people continue to learn troubling details about the politicization and misconduct at the highest levels of the FBI during the Obama-Biden administration," the Judiciary Committee's letter to Wray said. "Even more concerning, we continue to learn these new details from litigation and investigations — not from you. It is well past time that you show the leadership necessary to bring the FBI past the abuses of the Obama-Biden era."

Pientka, who participated in the FBI's 2017 interview with Flynn, "was intimately involved in the probe of former Trump aide Carter Page, which the DOJ has since acknowledged was riddled with fundamental errors and premised on a discredited dossier that the bureau was told could be part of a Russian disinformation campaign," Fox News reported.

The letter from Jordan and Johnson also called on Wray to produce "all documents and communications referring or relating to Crossfire Razor," the FBI code name for its investigation into Flynn.

The letter also called on Wray to produce "all documents and communications between or among the FBI and other executive branch agencies, including but not limited to the Executive Office of the President, for the period December 1, 2016 to January 20, 2017, referring or relating to LTG Michael Flynn’s December 30, 2016, conversation with Sergey Kislyak."

Reports last week noted that, in addition to the apparently calculated effort to get Flynn to commit perjury or obstruction, top FBI figures, including FBI Deputy Assistant Director Peter Strzok and FBI lawyer Lisa Page, repeatedly altered the “302 report” that was filed after Flynn's interview with the FBI.

Initially, when the lead FBI agent handling the case was asked whether Flynn lied during the interview, he stated that he did not believe so.

But over the coming days Strzok and Page would edit and revise the agent’s 302 report repeatedly, according to a document providing text messages between FBI officials that Flynn's defense counsel finally received last week.

George Washington University law professor Jonathan Turley stated in scathing April 30 op-ed for The Hill: "Various FBI officials lied and acted in arguably criminal or unethical ways, but all escaped without charges. McCabe had a supervisory role in the Flynn prosecution. He was then later found by the Justice Department inspector general to have repeatedly lied to investigators. While his case was referred for criminal charges, McCabe was fired but never charged. Strzok was also fired for his misconduct in the investigation.

"Comey intentionally leaked FBI material, including potentially classified information but was never charged. Another FBI agent responsible for the secret warrants used for the Russia investigation had falsified evidence to maintain the investigation. He is still not indicted. The disconnect of these cases with the treatment of Flynn is galling and grotesque."