An email from Oct. 10, 2015 which was found on the Hunter Biden laptop hints that Jake Sullivan, a former top aide to Secretary of State Hillary Clinton and current Team Biden National Security Advisor, may have violated the Espionage Act if he was involved in the storing of national defense information on Clinton's private e-mail server.

Alexander S. Mackler, currently Delaware's Chief Deputy Attorney General, who previously served as a deputy counsel to Joe Biden during his tenure as vice president, wrote in the email:

"The senders (Jake, etc) may be in deep shit if this is true."

Mackler was responding to an email in which Eric Schwerin, a lawyer with the Rosemont Seneca firm, forwarded an Oct. 15, 2015 Fox News article headlined "FBI Focused on ‘Gross Negligence’ in Clinton Probe".

The article includes this passage: “Three months after Hillary Clinton’s use of a private email address and server while secretary of state was referred to the FBI, an intelligence source familiar with the investigation tells Fox News that the team is now focused on whether there were violations of an Espionage Act subsection pertaining to 'gross negligence' in the safekeeping of national defense information.”

Garrett Ziegler, whose Marco Polo research group has compiled a database of the Hunter Biden laptop contents, noted in a Telegram post that Mackler, in the email, "was talking about the president's current national security advisor. The sender of that email is the current chief deputy Attorney General in the state of Delaware. Mackler knows all about the gun crimes that Hallie and Hunter committed, both at StarQuest Shooters & Janssen's Market."

In that case, the Secret Service intervened in an investigation into a 2018 incident involving Hunter Biden and his girlfriend at the time — his former sister-in-law, Hallie — in which she took his gun and tossed it into the trash, thinking he was going to kill himself with it, according to a March 25, 2021 report by Politico.

Police in Delaware launched an investigation in case the gun, left in a trash can across from a high school, had been used in a crime, the report said.

But Secret Service agents contacted the owner of the store where Hunter bought the gun and asked to take the paperwork recording the sale, Politico reported.

Ziegler added: "Mackler was also previously employed at the U.S. Attorney's office in Delaware, where a federal investigation into the Bidens is supposedly taking place, although you wouldn't know it bc they have brought precisely zero people to justice." 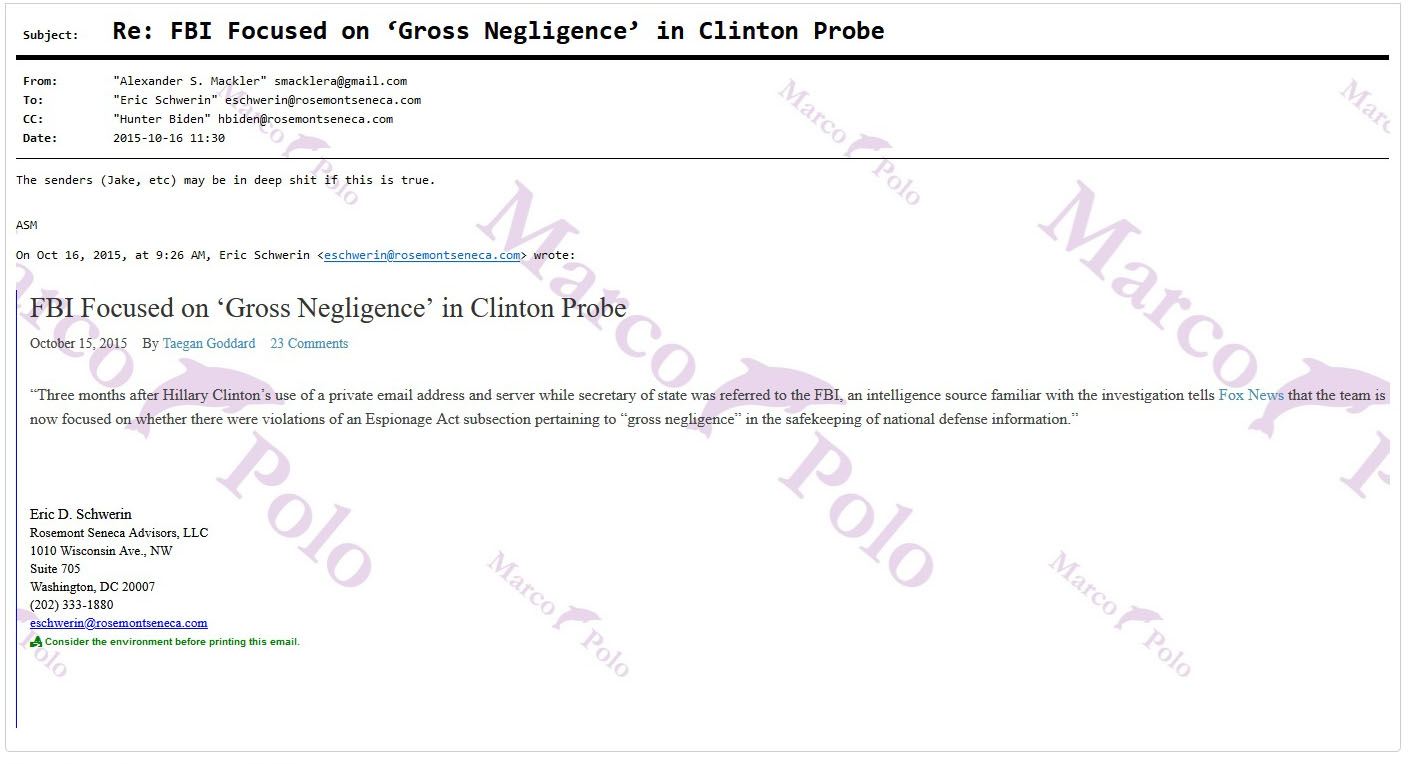 Ziegler's point is not lost on those who note that very few in the orbits of Bill and Hillary Clinton and Barack Obama have been brought to justice for the very same thing Democrats and their media allies are accusing former President Donald Trump of, absconding with classified documents.

Eric Trump, the president's son, confirmed the FBI told Trump's staff they were searching Mar-a-Lago on Monday for documents the National Archives believed were classified and missing. He said the FBI brought a safe cracker and cracked open a safe but found nothing. The younger Trump said the FBI removed boxes of documents without looking through them.

John Solomon of Just the News noted that "Back then in the summer of 2015, there was no raid of Mrs. Clinton's home in Chappaqua, N.Y., where the server has been operated. In fact, the former secretary of state's lawyer, David Kendall, was allowed to keep a thumb drive of the archive of her inbox — complete with classified materials — inside his office."

Solomon continued: "The FBI even approved a special safe for Kendall to use to store the classified materials. In the end, Mrs. Clinton faced no prosecution because then-FBI Director James Comey refused to send the matter to DOJ even though he declared her handling of classified emails as reckless."

Prosecutions under the Presidential Records Act have been rare.

The one prosecution in recent memory ended with a Clintonite getting off relatively scot-free.

President Bill Clinton's former National Security Advisor Sandy Berger, who removed sensitive documents from the National Archives by concealing them inside his clothing, reached a plea deal that spared him prison time in favor of probation, a fine, and community service.

Trump said in a statement: "In early June, the DOJ and FBI asked my legal representatives to put an extra lock on the door leading to the place where boxes were stored in Mar-a-Lago - We agreed. They were shown the secured area, and the boxes themselves. Then on Monday, without notification or warning, an army of agents broke into Mar-a-Lago, went to the same storage area, and ripped open the lock that they had asked to be installed. A surprise attack, POLITICS, and all the while our Country is going to HELL!

"My attorneys and representatives were cooperating fully, and very good relationships had been established. The government could have had whatever they wanted, if we had it. They asked us to put an additional lock on a certain area - DONE! Everything was fine, better than that of most previous Presidents, and then, out of nowhere and with no warning, Mar-a-Lago was raided, at 6:30 in the morning, by VERY large numbers of agents, and even 'safecrackers.' They got way ahead of themselves. Crazy!"