Danchenko was on the FBI payroll for three years despite prior concerns he was tied to Russian intelligence services. He was terminated as a CHS for the bureau in October 2020.

"Danchenko is the originator of the false claim trumpeted all over global media that Donald Trump told prostitutes to pee on beds the Obamas had slept in in a Russian hotel," The Federalist's Margot Cleveland noted.

"Simply put," Cleveland noted, "our federal government paid for Russian disinformation to frame the President of the United States for colluding with Russia. The FBI did this knowing that Danchenko 'was associate of two FBI counterintelligence subjects'; 'had previous contact with the Russian Embassy and known Russian intelligence officers'; 'had also informed one Russian intelligence officer that he had interest in entering the Russian diplomatic service'; and, according to a think-tank employee, suggested he had contacts willing to purchase classified information."

The FBI and Special Counsel Robert Mueller’s team "continued to use Danchenko as a paid CHS even knowing his stories were fabrications. In fact, Mueller’s team was so focused on getting Trump, it completely ignored whether the Steele dossier included Russian disinformation," Cleveland noted.

Trump said in a post on Truth Social following Durham's filing: "FBI working with Russia to get Trump. If this were reversed, it would be the biggest story in 50 years. The Fake News Media does everything possible not to cover it - but the people know!" 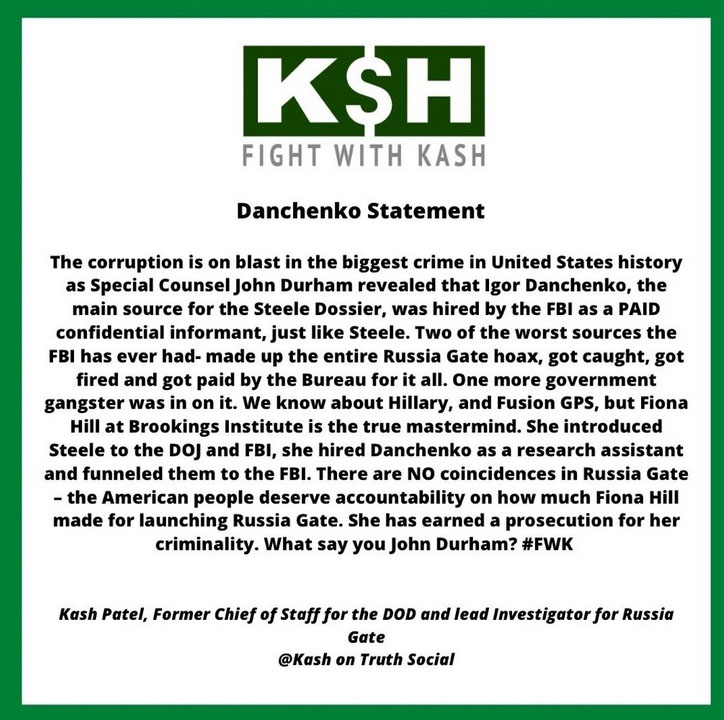 When the Steele dossier was released, "the media picked-up on the most salacious rumors, one that was utterly unbelievable: that Russian intelligence had a video of Trump involved with prostitutes at the Moscow Ritz-Carlton Hotel. Also known as the 'pee tape,' " the Sept. 13 Techno Fog report on substack.com noted.

"The allegation came from Danchenko, who attributed it to his sources — one from the Ritz-Carlton, and another being Sergei Millian. Durham will refute it, as it expects to call at trial 'Bernd Kuhlen,' the then-general manager of the Ritz-Carlton, who will deny speaking with or ever meeting Danchenko 'in June 2016, or at any time.' "

Durham's Sept. 13 filing revealed that the primary sub-source for the Steele dossier, paid for by Clinton, was not merely a Russian national who fabricated the “intel,” but was also a suspected Russian agent. Tuesday’s motion also highlighted the fact that 2016 Clinton campaign advisor Charles Dolan "maintained a relationship with several high-ranking Russian government officials who appear in the Steele Reports."

Dolan is expected to testify at trial.

According to Durham: "[T]he Government anticipates that Mr. Dolan will testify that (1) it was he and Mr. Kupka who attended a lunch with the Ritz-Carlton general manager and other hotel staff during the June 2016 Moscow trip and that [Danchenko] was not present, and (2) neither Donald Trump nor his purported sexual practices were ever discussed at that lunch. Further, the Government also anticipates that Mr. Dolan will testify that Ritz-Carlton hotel staff did, in fact, provide the aforementioned tour of the presidential suite as part of the June 2016 trip and that, again, Donald Trump and his purported sexual practices were not discussed during that tour."

"So, for all her vapors over Trump’s connections with Russia and his supposed collusion with Russia to interfere in the election, the evidence shows Clinton holds that dishonor," Cleveland wrote.

Timeline of key events in the Trump-Russia hoax:

• October 2016: The first Carter Page FISA warrant is submitted to the FISC.

• January 12, 2017: The application for the second FISA warrant is submitted to the FISC.

• January 24-25, 2017: Danchenko is first interviewed by the FBI. At those meetings, he made false statements that he spoke to Sergei Millian by phone and that Millian agreed to meet him in New York. Both those claims were false.

• March 16, 2017: Danchenko lies to FBI agents that “he received a late July 2016 telephone call from an individual who Danchenko believed was ‘probably’ [Millian"], when in truth and in fact, and as the defendant well knew, [Millian] never called Danchenko.”

• April 7, 2017: The application for the third FISA warrant is submitted to the FISC.

• May 18, 2017: Danchenko falsely states to FBI agents that he “‘was under the impression’ that a late July 2016 telephone call he received was from [Millian']” when in fact Millian never called Danchenko.

• June 15, 2017: Danchenko lies to FBI agents that he had never “spoken with PR Executive-1” (Dolan) about the dossier allegations.

• June 29, 2017: The application for the fourth FISA warrant is submitted to the FISC.

• October 24, 2017: Danchenko lies to FBI agents, stating that he had spoken to Millian “on the telephone on more than one occasion.”

• November 16, 2017: Danchenko lies to the FBI against, stating “he had spoken to [Millian] on the telephone” when he knew he never did.

Millian, a key figure in the timeline, has said he will not testify at trial. Millian, who is currently abroad, has voiced concerns for his safety, stating he does not trust the FBI. Durham can’t compel Millian’s attendance. While he is a key witness, analysts say Durham can still get a conviction with Millian's testimony.

Kevin Brock, former FBI Assistant Intelligence Director, told Just the News that Durham's revelation seems to indicated the FBI had "outcome bias, where investigators get so enamored with an investigative theory and belief that they stop hearing what their sources are telling or they only hear that which they want to hear.” But also that the Bureau seemed to have "a sense of urgency to run with it and believe what they wanted to believe.”

Still, Brock added, "we're left with a big question, why in the world did they feel like they had to sign up, Igor Danchenko as confidential human source of the FBI and then pay him?"

Meanwhile, the grand jury that Durham has recently used to hear evidence has expired. While he could convene another, there are currently no plans to do so, reports are saying.

Durham and his team are working to complete a final report by the end of the year, reports say, and one of the lead prosecutors on his team is leaving for a job with a prominent law firm. After Durham’s team completes its report, it will be up to Attorney General Merrick Garland to decide whether to make its findings public.

Danchenko faces trial next month on five counts of lying to the FBI related to his role as Steele’s primary sub-source. One count of the indictment concerned Danchenko’s denial during an FBI interview on June 15, 2017, of having spoken with “PR Executive-1” about any material contained in the Steele dossier. “PR Executive-1” has since been identified as the Clinton and Democratic National Committee-connected Charles Dolan, Jr. Also according to the special counsel’s office, Danchenko fed Steele at least two false claims about Trump that originated in part from Dolan.

The four other counts of the indictment concerned Danchenko’s allegedly false claims that he had spoken with a source whom he believed was the then-president of the Russian-American Chamber of Commerce, Sergei Millian. Danchenko repeated that assertion during several different FBI interviews.