Why was Georgia’s Gov. Kemp at World Economic Forum? 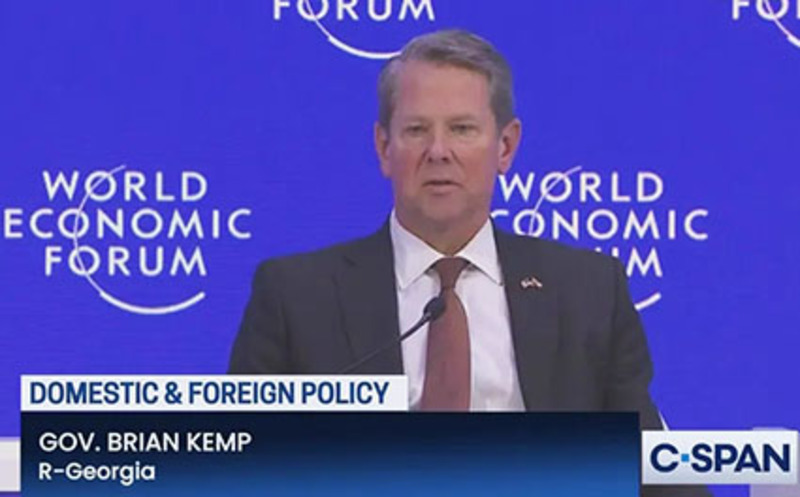 In the About page on his official government website, Georgia Republican Gov. Brian Kemp is described as "a husband, father, businessman, and public servant."

Nowhere on the page does it state that Kemp is a conservative.

So, for those who really know what Kemp is all about, it was no surprise that he could not resist an invitation to hobnob with the gathering of elite globalists at the World Economic Forum’s (WEF's) annual conference in Davos, Switzerland.

Journalist Leo Hohmann issued perhaps the best explanation on why the Georgia governor was really in Davos:

"Some have suggested that Kemp might just be going to Davos to gather information on a fact-finding trip, but I’m not buying it. Kemp has always been a globalist. He has courted the Chinese Communist Party to invest in Georgia, literally making promotional videos on how wonderful it is for Georgia to partner with the Chinese communists in various business ventures. Kemp has also rolled out the red carpet for the ultra-liberal film industry, much of which has relocated from California to avoid the high taxes there and take advantage of Georgia’s relatively cheap Southern labor. And people wonder why Georgia is turning from red to purple," Hohmann wrote.

In fact, Kemp received praise from WEF founder Klaus Schwab’s top operatives for his refusal to “give in” to the election integrity movement.

“We know you well,” Børge Brende, who is often seen as Schwab’s second in command and possible successor, told Kemp. “You came under some pressure [to secure Georgia’s elections] but you didn’t really give in on that did you?”

Kemp did not give a vocal response. He didn't need to. He simply nodded at Brende before shifting the conversation to the economy, and claiming that he believes that Democrats will join with Republicans in securing America’s southern border.

Kemp went on to sit silently as Illinois Democrat Gov. JB Pritzker blasted the GOP and claimed that Joe Biden has “gotten things done for the United States,”

"No, Brian Kemp is no principled conservativem," wrote Hohmann.

"The Davos meeting is for elite globalists in key positions of power in government, business, Big Tech, Big Pharma and the field of entertainment. They will huddle in mostly private meetings to exchange ideas on how to advance globalism in the coming year, presenting their proposals and plans for how to use public-private partnerships to usher in what they call the Great Reset and the Fourth Industrial Revolution — which is essentially a plan to digitize all living and non-living things on the planet so they will be more trackable and controllable," Hohmann continued.

In other words, Kemp was in Davos to "sell out Georgia to the highest bidder."

Hohmann’s article resonated so much that Kemp himself chose to respond by sending the email below from his private account to rebut Hohmann’s charges. 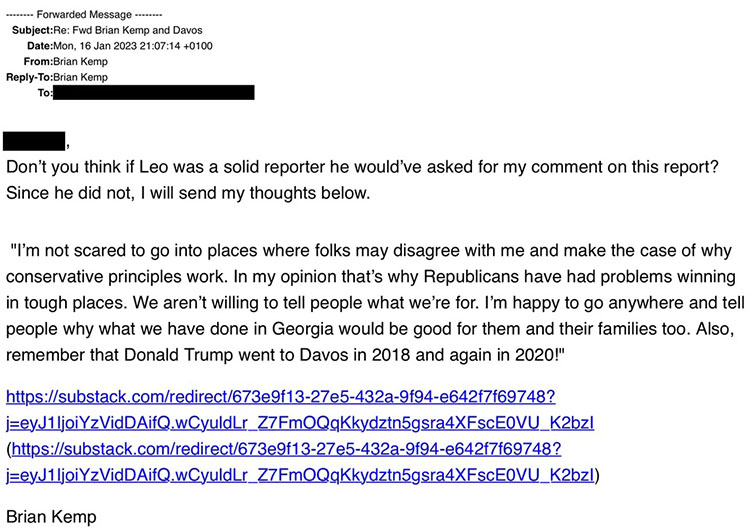 Except Trump went to confront the globalists, not just nod in their general direction.

Canada's Rebel News, which did some of the only real journalism at the Davos 2023 gathering, confronted Kemp (see below) about his meeting with the globalists. As was the case when Rebel News confronted Pfizer CEO Albert Bourla about the ineffectiveness of the Covid jabs, Kemp refused to comment.

Independent journalist Emerald Robinson noted: "Needless to say, if you think Klaus Schwab and Bill Gates and the rest of the globalists invited Brian Kemp to Davos to lecture them in public about the virtues of conservative principles — well, it’s probably a good time to stop sniffing glue."

Meanwhile, in another "why was he there" moment, FBI Director Christopher Wray spoke at the WEF about cybersecurity, but reinforced the revelations by the Twitter files that his agency is potentially violating the First Amendment of the U.S. Constitution by censoring editorial content and suppressing free speech in "partnership" with Big Tech.

"The sophistication of the private sector is improving, and particularly important, the level of collaboration between the private sector and the government. Especially the FBI has I think made significant strides. We are focused on looking at cyber attacks," Wray said.

Why is FBI Director Christopher Wray speaking at the World Economic Forum?