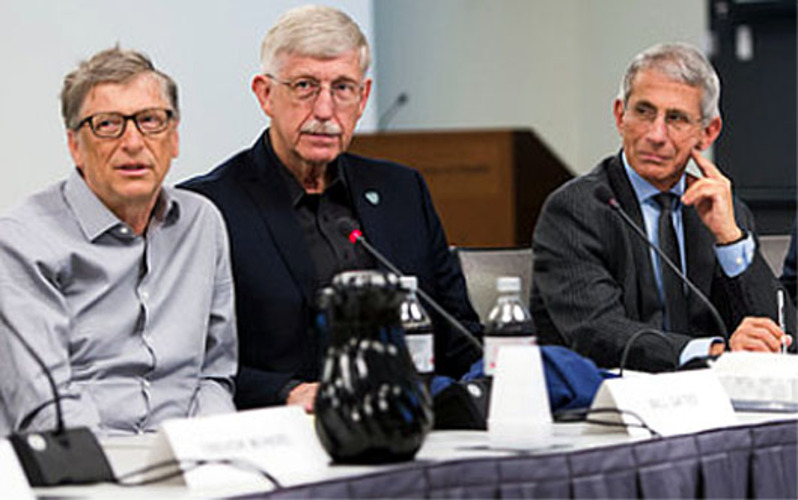 Bill Gates and Anthony Fauci have ascended to national prominence during the coronavirus crisis and yet neither is being pressed to explain, clarify, or justify any of their proclamations on COVID-19, a columnist noted.

Both support a national tracking system or ID for those who have been tested for and those most vulnerable to the coronavirus, Cheryl K. Chumley noted in an April 11 analysis for The Washington Times.

Doesn't this come off as Orwellian? And given all the viruses around, where is all this headed?

Gates and Fauci "have been given some mighty powers in recent weeks — specifically, the powers of influence that have led to the shuttering of businesses; shutting up of citizens in their homes; shutting down of schools around the nation; stalling of the national economy; and of late, shaping of messaging that’s led to thousands of Americans wearing stupid face masks everywhere they go," Chumley wrote.

"But because Gates is a philanthropist who’s giving millions and maybe billions to help develop a coronavirus vaccine, and because Fauci is the director of the National Institute of Allergy and Infectious Diseases, NIAID, and thereby, by default, by medical professional and government service default, afforded philanthropist-like status — the media give free passes to them both," Chumley wrote.

Gates and Fauci "have made some curious remarks both in their pasts and based on these faulty coronavirus predictions," Chumley wrote.

Gates's Reddit comment was widely published — "and then widely rebuffed by his defenders," Chumley noted. "But the fact is, Gates himself wrote in March, on his own GatesNotes blog, that the 'question of which businesses should keep going is tricky' in this ever-changing coronavirus social distancing environment — but not to worry, '[e]ventually we will have some digital certificates to show who has recovered or been tested recently or when we have a vaccine who has received it.' ”

"Obviously, some kind of recording and tracking mechanism that relies on technology to alert — in context of discussing coronavirus — 'who has recovered,' versus who has 'been tested,' versus who has been administered a vaccine, 'when we have [one],' ” as Gates wrote.

It's not as if Gates "hasn’t previously expressed interest in implementing a government tracking system of citizens on a wide-scale basis," Chumley noted.

In January 2019, once again on his own GatesNotes blog, Gates wrote: “An ID can help improve the lives of the world’s poorest and most vulnerable people.” He was writing specifically about a biometric based identification and tracking system. "And he was writing it from the perspective of fawning," Chumley wrote.

Gates, on his blog, continued: “How do you prove you really are who you say you are? … For the last decade, Nandan Nilikani … one of India’s leading technology entrepreneurs … joined the government of India to lead the launch of India’s national biometric ID system, which uses fingerprints and other biological traits to verify the identities of the country’s more than 1.3 billion residents. This ID system … is the world’s largest biometric identification system and has become a valuable platform for delivering social welfare programs and other government services.”

Gates wrapped his post with this: “Thanks to the work Nandan is doing the world is moving closer to the day when everyone will have access to an official ID. The sooner we can achieve this goal, the sooner the world’s poorest residents will not only be able to prove who they are, but also realize their aspirations for better lives.”

Fauci serves as a member of the Leadership Council for the Global Vaccine Action Plan developed by the Bill &amp; Melinda Gates Foundation, the World Health Organization, UNICEP and Fauci’s own NIAID — the plan that calls for a “Decade of Vaccines” to spread far and wide, all around the globe.

Now comes Fauci with this, as reported by Politico: “Coronavirus immunity cards for Americans are ‘being discussed.’ ”

"Immunity cards — already implemented in Germany; currently being discussed in the United Kingdom and Italy — are identification documents to prove vaccination. They’re quite popular, it seems, in communist China," Chumley wrote.

Politico reported that “In parts of China, citizens are required to display colored codes on their smartphones indicating their contagion risk. The controversial surveillance measure facilitated … the end of the lockdown of Wuhan.”

Chumley wrote: "Show me your papers or stay quarantined! Is that the direction America’s headed?"

Fauci also said: “I mean, it’s one of those things that we talk about when we want to make sure that we know who the vulnerable people are and not.”

The vulnerable people? Fauci means those at risk from coronavirus.

"The real vulnerable are all the freedom-loving Americans watching with dismay as their free America is destroyed by the likes of unelected wonks — unelected, unaccountable to the people, and apparently, unconcerned at all with the God-given rights of constitutionally protected individuals."

Fauci has suggested that America can never return to normal until a coronavirus vaccine is developed. "And by logical extension, that’s to say — never, until a vaccine is developed that must then be included on the required list of shots for all children to attend school," Chumley wrote.

"What great news for Bill Gates who just announced his foundation is going to spend billions of dollars to help build factories for seven possible coronavirus vaccine makers. 'Spend' is probably the wrong word here. Invest is more like it."

Fauci warned at a White House briefing: “When we get back to normal, we will go back to the point where we can function as a society. But … [i]f you want to get back to pre-coronavirus, that might not ever happen in the sense that the threat is there. But I believe that with the therapies that will be coming online, and the fact that I feel confident that over a period of time we will get a good vaccine, that we will never have to get back to where we are right now.”

He also said this: “If back to normal means acting like there never was a coronavirus problem, I don’t think that’s going to happen until we do have a situation where you can completely protect the population.”
American is "focused on fear," Chumley wrote. "We should be focused on this: the money trail. The money and power trail. The Global Vaccine Action Plan, for instance."

The Gates Foundation reported in a press release: “The World Health Organization, UNICEF, the National institute of Allergy and Infectious Diseases and the Bill &amp; Melinda Gates Foundation have announced a collaboration to increase coordination across the international vaccine community and create a Global Vaccine Action Plan. The collaboration follows the January 2010 call by Bill ad Melinda Gates for the next ten years to be the Decade of Vaccines.”

The “Decade of Vaccines?”

It’s a structured campaign. It includes a Leadership Council, a Steering Committee, an International Advisory Committee — and other bureaucrats. The Leadership Council “is comprised of … Dr. Anthony S. Fauci,” the Gates Foundation reported.

Fauci, "the same guy who just set the stage for the dire need for a protective coronavirus vaccine, has a vested interest in seeing this vaccine come to fruition — come to widely administered fruition," Chumley noted.

“Vaccines are miracles,” said Pedro Alonso, the director for the Institute for Global Health of Barcelona, and another stakeholder in the “Decade of Vaccines” program.