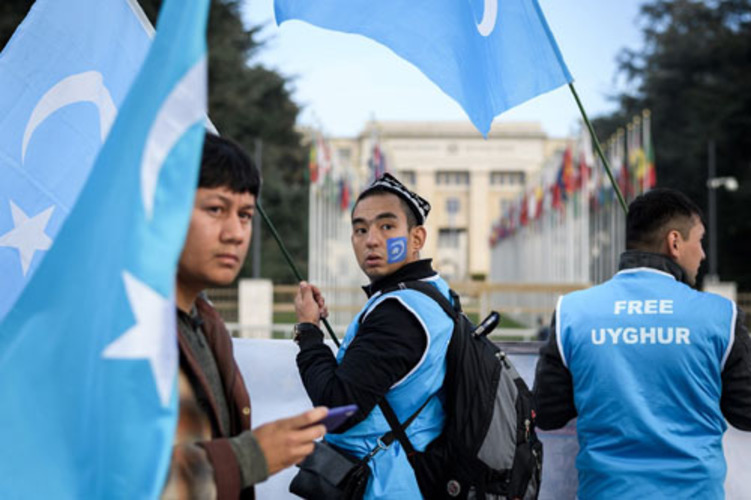 Uyghurs demonstrate against China outside of UN offices in Geneva in November 2018.
uyghrprot by Fabrice Coffrini is licensed under N/A
FPI / April 13, 2020

China's appointment to a seat on the Consultative Group of the United Nations Human Rights Council (UNHRC) has sparked global outrage from human rights groups.

China's appointee, Jiang Duan, will be part of a panel that will select the UNHRC’s monitors on health, freedom of speech, arbitrary detention and enforced disappearances.

UN Watch executive director Hillel Neuer said the appointment was "like making a pyromaniac into the town fire chief."

Dolkun Isa, president of the Munich-based World Uyghur Congress (WUC) exile group, cited China's incarceration of up to 1.8 million Uyghurs and other Muslim minorities in internment camps since April 2017. Isa said putting China on the panel was "like appointing a wolf to protect sheep.”

"In order to deflect international condemnation and cover up its crimes against humanity in East Turkestan, China has been aggressively manipulating the United Nations mechanisms and monopolizing important position to promote its disinformation and propaganda campaigns," Isa said. East Turkestan is many of the 10.5 million Uyghurs' preferred name for the Xinjiang Uyghur Autonomous Region (XUAR), established by China in 1955, six years after Beijing's new communist government asserted control over the region.

The Uyghur Human Rights Project (UHRP) said Beijing should play no role in the selection of UN rights experts and investigators.

"The Chinese government is committing crimes against humanity as we speak," UHRP Executive Director Omer Kanat said. "What are the chances that the Chinese representative will agree to have truly independent monitors in these roles?"

China will be able to influence the selection of at least 17 investigators over the next year, as well as vetting and recommending candidates for critical human rights posts.

U.S. Rep. Chris Smith, New Jersey Republicans and senior member of the House Committee on Foreign Affairs and ranking member of the Congressional-Executive Commission on China, condemned Jiang’s appointment to the UNHRC’s Consultative Group. “There is no justification whatsoever in empowering a Chinese government official, Jiang Duan, to investigate human rights abuses until there is a reckoning with regard to China’s own record.”

Veteran rights activist Yang Jianli, who has acted as adviser to UN Watch, said "China's appointment to the advisory panel proves once again that the United Nations is no longer able to fulfill its proper functions. To say that the UN Human Rights Council is now purely cosmetic is putting it mildly; actually it now defends human rights abusers."

In Dharamsala, India, a spokesman for the Central Tibetan Administration in exile said the move was "very unfortunate."

"It will greatly disturb the world order and restructure the narrative around human rights," T.G. Arya said. "Tibetans, Chinese, Uyghurs, Mongolians and the people of Hong Kong, who are all victims of the Chinese Communist Party’s oppressive regime, all now fear that they will not get fair hearing."

Dharamsala warned: "If China’s diplomatic arm-twisting continues undeterred in this way, it will encourage the rise of totalitarianism."

The International Campaign for Tibet said China's appointment to the panel was "a blow to the global human rights system. At the UN Human Rights Council, China obstructs civil society participation and makes a mockery out of established human rights mechanisms, such as the Universal Periodic Review."

The five-nation Consultative Group , now consisting of China, Chad, Spain and Slovenia (with one state awaiting nomination), makes crucial decisions about which candidates pass through the initial stages in the appointment process.

"The Chinese mission in Geneva will effectively hold veto power over any candidates it does not favor," UHRP said, warning that China is already trying to rewrite the definition of human rights at the UN to suit its own purposes.

“The Chinese government’s decision to deceive the international community about the grave dangers of the initial 2019 novel coronavirus (COVID-19) outbreak in Wuhan, China, violates any credibility on human rights and should disqualify them from a position on the Human Rights Council Consultative Group,” said the letter.

“Through intimidation of its medical first responders, censorship of online forums, and threats of severe punishment for anyone who dared to speak out with the truth, the Chinese Communist Party engaged in its most egregious human rights abuse: the unchecked spread of a new and dangerous virus on an unwitting global population,” the senators wrote.