What happened in Colorado Sec of State primary?

Official results for the Republican primary race for Colorado secretary of state have Pam Anderson leading with 43% of the vote and frontrunner Tina Peters second or possibly third with 28%.

The fact that Trump-supporter Tina Peters conducted an investigation into fraud in the 2020 election and the role played by Dominion Voting Systems  should raise eyebrows when looking at the outcome. She after all was indicted as a result.

There are several other things wrong with this story. Stick with us.

One thing to keep in mind is that the one issue the corporate media avoids when it comes to the disputed 2020 election is the massive nationwide impact of Dominion Voting Systems which happens to be headquartered in Denver, Colorado.

Another issue is that Mike O'Donnell, a businessman originally from Australia, picked up 28% and, once all votes are counted, could beat Peters.

Who is Mike O'Donnell?

Nobody really seems to know. But somehow he got more than 170,000 votes in the GOP primary.

And what about the alleged leader? Who is Pam Anderson?

Well, she is the Director (on temporary leave) of the Center for Tech and Civic Life. The CTCL is that nonprofit that put $400 million of Mark Zuckerberg's money into the 2020 elections. Those "Zuck bucks" primarily benefited heavily Democrat counties. And this "moderate Republican" got the most votes Tuesday?

"Something stinks in Colorado," independent journalist Emerald Robinson noted in a substack.com post on June 30.

The winner of the GOP runoff will face Democrat incumbent Jena Griswold, whose campaigns have been heavily funded by leftist billionaire George Soros.

The race for secretary of state of Colorado is high profile given that Peters, the Clerk of Mesa County, is a supporter of President Donald Trump who has appeared at his rallies and has fought hard for election integrity in the state. That to Democrats and the media means Peters is part of the "Big Lie."

Peters outraised both of her opponents by 3 to 1 and was considered the frontrunner in the GOP primary.

According to Colorado Public Radio News, O’Donnell raised just $4,700 for his campaign three weeks before the primary.

So how does a candidate with no money and no name recognition get 28 percent in such a high profile race, Robinson asked.

Robinson said she "went looking" for O'Donnell's supporters but "didn’t find them."

On Facebook, only 193 people were following his campaign page.

On Twitter, 560 were following his campaign. The day before the election, his last tweet managed to get 4 “likes.”

O’Donnell sent out 1,306 tweets on his account and the vast majority of them got: 0 Likes — and 0 Retweets — and 0 Comments.

"There was no interaction on his Twitter account because nobody was voting for Mike O’Donnell," Robinson wrote.

And yet O’Donnell actually managed to win 17 counties in Colorado in the GOP primary.

Here’s a screenshot of those wins county by county for O’Donnell (in yellow) from the New York Times: 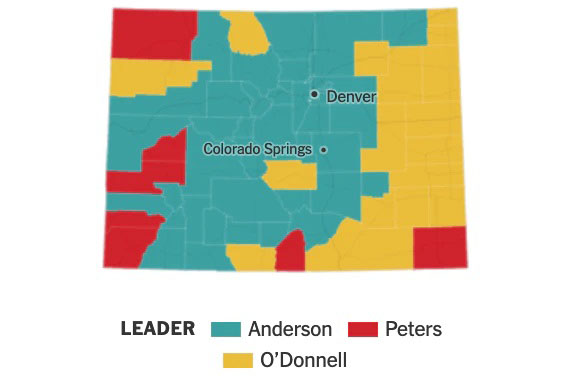 Robinson noted: "I didn’t even know that Mike O’Donnell was running in the race until I saw the race results. How did an unknown candidate like Mike O’Donnell manage to garner as many votes as a national political figure like Tina Peters?

"This question, ladies and gentlemen, is what leads you down the rabbit hole of America’s bogus election system.

"Does this scenario seem remotely possible to you?"