Warning to 'germaphobe president': 'The Ruling Class is smiling 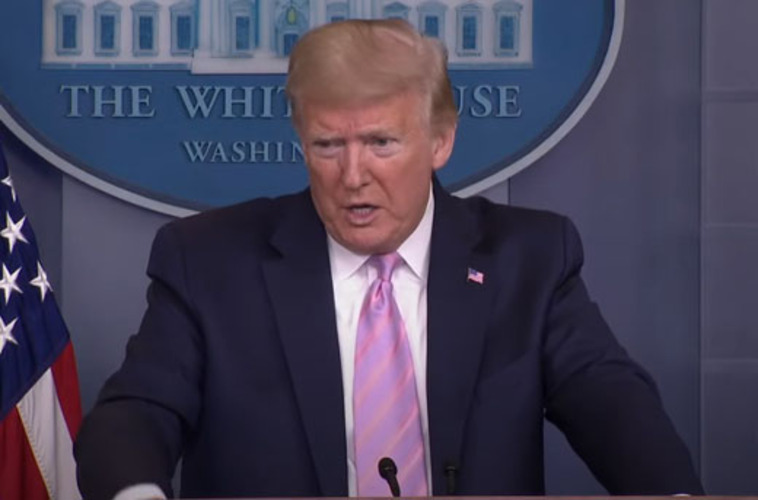 'Americans elected Donald Trump because they disliked what the ruling class had been doing to the country.'
djtcovd410 by N/A is licensed under N/A
FPI / April 13, 2020

It's a well-reported claim that President Donald Trump is a germaphobe. The president himself has confirmed it, a columnist noted.

"This puts him in a vulnerable leadership spot on the coronavirus outbreak," Cheryl K. Chumley wrote for The Washington Times on April 3.

Writing for American Greatness on April 7, Angelo Codevilla noted: "One thing is certain: That the ruling class savors the grip on us that it has achieved during the past three weeks — above all the presumption that we must quietly accept non-legal decrees from on high. It will not give up that grip without a fight."

Codevilla added: "Regardless of when Trump acts to reopen the country, they will do whatever is in their power to prevent him from exiting the path to political perdition which he has entered. They won’t give him a pass out of it, no matter what. Nothing that happens in April, or in May, June, or whenever, nothing that any curve does, will induce any of the ruling class to say, 'OK, let’s all wash our hands, take precautions to protect the old and the obese, and get back to normal.' ”

The Washington Post wrote in headline from January, 2017: “Shaking hands is ‘barbaric’: Donald Trump, the germaphobe in chief”.

The Post piece went on to quote Trump as saying, “I’m also very much of a germophobe, by the way, believe me.”

Business Insider reported in July, 2019: “Trump is such a germaphobe that aides aren’t allowed to cough in his presence and visitors must wash their hands before entering the Oval Office, report says.”

From The Hill, in February of this year: “Trump nods at reputation as germaphobe during coronavirus briefing: ‘I try to bail out as much as possible’ after sneezes.”

And from Vanity Fair last month: “‘He’s Definitely Melting Down Over This’: Trump, Germaphobe in Chief, Struggles to Control the Covid-19 Story.”

Chumley wrote: "This is not to say Trump can’t lead the country well through this coronavirus storm. He’s doing a great job; he’s doing better than most would in his shoes."

But, Chumley added, the president is "vulnerable on the medical front. He’s vulnerable to overkill based on medical advisements. There’s no way his own admitted germophobia doesn’t color, to some degree, his interpretations and understanding of coronavirus dangers, his filtering and analysis of medical advisements, his acceptance versus challenge of health industry recommendations."

Chumley went on to note that "if Trump could be compared to Superman in the way he’s boldly, brashly, brazenly taken on the the globalists, the entrenched politicians, the climate change alarmists, the socialists, China and the United Nations, all the while bolstering the U.S. economy to great gain — well then, the Lex Luthors of the deep state no doubt think they’ve found their kryptonite with the coronavirus."

Meanwhile, the "partisan hacks of the left will use this national panic to their best political advantage," Chumley wrote. "What Trump needs more than anything right now is clear, factual information on the coronavirus — in context, in comparison, in a cooler head look at other diseases, other considerations, other national priorities. Fewer doctors, more economists. Anything less is a disservice to truth, and to the country."

That is why, Codevilla wrote, "the ruling class’s nonstop campaign to show in every imaginable way that Trump is outside all of its norms only strengthened the people’s preference for him over them. As the mutual disdain that divides the American people and the ruling class continues to grow, and as Trump stands unmistakably as the former’s protector against the latter, the fundamental law of politics (who is on whose side?) guarantees his re-election by a bigger margin."

That is, Codevilla wrote, "Unless, of course, Trump himself sides or is perceived to be siding with the rulers against the ruled. In that case, his fate is even surer to be that of the proverbial salt that has lost its savor, 'thenceforth good for nothing, but to be cast out, and to be trodden under foot of men.' ”

Since the Ides of March, Trump "has placed himself on a path that the fundamentals suggest leads to political suicide," Codevilla wrote. "He did this by surrendering to the ruling class — Drs. Anthony Fauci, Deborah Birx, et al, not to mention House Speaker Nancy Pelosi — his judgment on whether and for how long, and how the country should be shut down. This is of the greatest concern to the American people in general and to his voters in particular. By giving his imprimatur while suggesting that he is acting against his own better judgment, he fulfills the dictionary definition of tragedy."

The president "knows how wrong Fauci was in the professional judgments he had given in January and February minimizing the novel coronavirus’s effects — for which he is not being held responsible — even as Trump was damned as a racist for closing down air traffic from China on January 31," Codevilla wrote.

"Every day, Trump (and the country) learns the ostensibly professional estimates by which Fauci, the Democrats, and the media have been flogging since mid-March are proving wrong by huge factors. And Trump knows that they are wrong because they are based on numbers that do not reflect reality."

Trump "is eager to open the country," Codevilla wrote. "And he knows that the American people will hold him, not Fauci or anybody else, responsible for the pain that adherence to the ruling class’s estimates is causing and will cause us. Speculating why, nevertheless, Trump persists in lending legitimacy to these flawed professionals, indeed why he lets them speak in his name, is pointless."

Codevilla concluded: "To wit: Start from the fact that the ruling class is discredited. Separate yourself from it. Lose no opportunity to add to the discredit. Stress your own responsibility. Act on it. When they damn you, double damn them. Politics 101."