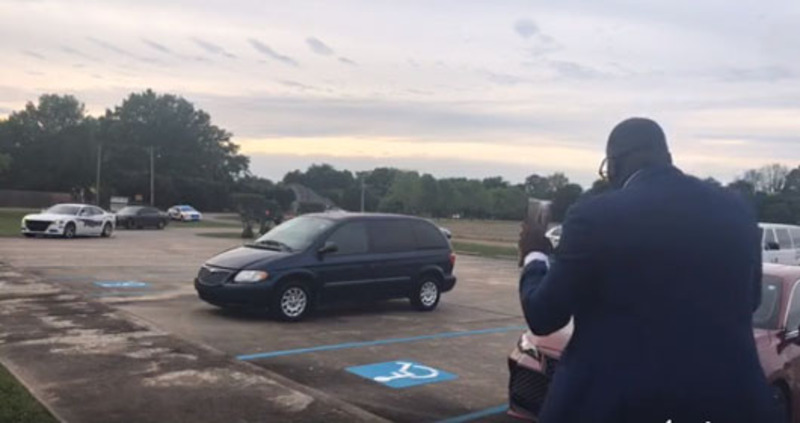 Police cruisers were present as Pastor Charleston Hamilton held a service in the parking lot at King James Bible Baptist Church in Greenville, Mississippi.
gvillemiss by N/A is licensed under N/A
FPI / April 13, 2020

Supporters of religious freedom are mounting a major battle against governors and mayors in the U.S. who have banned church services amid the coronavirus outbreak.

The Department of Justice said it may take action next week against local governments that have cracked down on religious services.

“While social distancing policies are appropriate during this emergency, they must be applied evenhandedly [and] not single out religious [organizations],” DOJ Director of Communications Kerri Kupec tweeted.

Kentucky Gov. Andy Beshear, a Democrat, said local officials were being directed to record license plate numbers of churchgoers to pass to local health departments, Kentucky.com reported on Friday. People who attended religious gatherings could expect public health officials to show up at their doors with mandates that they self-quarantine for 14 days, the governor said.

“If you’re going to expose yourself to this virus, it’s not fair to everybody else out there that you might spread it to,” Beshear said. “Understand, this is the only way we can ensure your decision doesn’t kill somebody else.”

Beshear's order reportedly does not apply to drive-in services, but seemingly includes houses of worship that implement social distancing efforts and smaller services.

Religious freedom advocates say New York City Mayor Bill de Blasio has been outright hostile to the faithful during the coronavirus crisis. The mayor has deemed houses of worship non-essential and threatened to close down churches and synagogues permanently if they don’t obey his shutdown order.

“So, I want to say to all those who are preparing the potential of religious services this weekend – if you go to your synagogue, if you go to your church and attempt to hold services after having been told so often not to, our enforcement agents will have no choice but to shut down those services,” de Blasio threatened.

“No faith tradition endorses anything that endangers the members of that faith,” the mayor continued. “So, the NYPD, Fire Department, Buildings Department, and everyone has been instructed that if they see worship services going on, they will go to the officials of that congregation, they’ll inform them they need to stop the services and disperse.”

“If that does not happen, they will take additional action up to the point of fines and potentially closing the building permanently,” de Blasio added.

• The mayor of Louisville threatened to fine anyone who attended drive-in Easter Sunday church servicea, even though attendees would remain in their cars in the parking lot.

• A Virginia family filed a complaint in U.S. District Court challenging Gov. Ralph Northam’s ban on groups larger than 10, including in houses of worship.

• In Greenville, Mississippi, two churches have said that police came to their drive-in services and threatened to fine worshipers.

In Louisville, the On Fire Christian Center sought an emergency Temporary Restraining Order, which was granted by federal Judge Justin Walker in the Western District of Kentucky.

Walker's opinion does not question the government's ability to impose restrictions on the public to fight a pandemic. The central reasoning of the opinion is that because Louisville does not impose similar restrictions on parking at drive-through restaurants or liquor stores, singling out a religious establishment for more harsh treatment is unconstitutional.

Judge Walker wrote: “As we are all painfully aware, our nation faces a public health emergency caused by the exponential spread of COVID-19, the respiratory disease caused by the novel coronavirus SARS-CoV-2. Four days ago, defendant Mayor of Louisville Greg Fischer said it was 'with a heavy heart' that he was banning religious services, even if congregants remain in their cars during the service. He asserted, 'It’s not really practical or safe to accommodate drive-up services taking place in our community.' Drive-through restaurants and liquor stores are still open.

"On Sunday, tomorrow, Plaintiff On Fire Christian Center wishes to hold an Easter service, as Christians have done for two thousand years. On Fire has planned a drive-in church service in accordance with the Center for Disease Control’s social distancing guidelines."

The court noted that Louisville "has targeted religious worship by prohibiting drive-in church services, while not prohibiting a multitude of other non-religious drive-ins and drive-throughs – including, for example, drive-through liquor stores. Moreover, Louisville has not prohibited parking in parking lots more broadly – including, again, the parking lots of liquor stores. When Louisville prohibits religious activity while permitting non-religious activities, its choice 'must undergo the most rigorous of scrutiny.' That scrutiny requires Louisville to prove its interest is 'compelling' and its regulation is 'narrowly tailored to advance that interest.'

"Louisville will be (highly) unlikely to make the second of those two showings. To be sure, Louisville is pursuing a compelling interest of the highest order through its efforts to contain the current pandemic. But its actions violate the Free Exercise Clause “beyond all question”59 because they are not even close to being 'narrowly tailored to advance that interest.' "

In Virginia, a family of 12 filed a complaint in U.S. District Court challenging Northam’s ban on groups larger than 10, including in houses of worship, and to declare churches "essential," just as doughnut shops are.

Becca and Mariano Diaz-Bonilla of Vienna argue that their rights are being violated because their family is big, with 10 children, and thus they aren’t allowed to attend mass as a complete family or even to have their Catholic priest come to their home to conduct a Mass.

The family, which has promised to practice safe social distancing and other rules to block the spread of the virus, said in the court document: “Especially during a challenging time, plaintiffs rely on prayer to God and access to the Sacraments for grace. Plaintiffs’ rights as practicing Christians will be irreparably harmed if they are prevented from celebrating the Easter worship services, starting with Good Friday services on April 10, 2020.”

In its defense of pastor Charleston Hamilton and King James Bible Baptist Church in Greenville, Mississippi, First Liberty Institute special counsel Jeremy Dys noted that police have been ticketing church drive-ins. Dys provided the Washington Examiner with a photo of Hamilton preaching in a parking lot where the well-spaced cars, windows up, were outnumbered by police cruisers.

Hamilton also posted videos of the drive-ins, including one that showed police in a cluster outside of their cars.

In Greenville, Mayor Errick Simmons’ office said in an April 7 press release announcing a ban on in-person and drive-in church services: “Churches are strongly encouraged to hold services via Facebook Live, Zoom, Free Conference Call, and any and all other social media, streaming and telephonic platforms.”

Attorneys with the Alliance Defending Freedom have filed a lawsuit challenging that order on behalf of the Temple Baptist Church in Greenville.

Kelly Shackelford, president of the First Liberty Institute, argued in an appearance on “Tucker Carlson Tonight” on Friday that the city’s order “is just massively unconstitutional. It targets churches in a way that it targets no other group. Cars in parking lots are fine. It’s only a crime if the cars in the parking lot are at the church parking lot.”

While most states have deemed houses of worship non-essential, there have been some holdouts who called for allowing safe services to move forward.

Republican Florida Gov. Ron DeSantis overruled some counties within his state. He designated churches, synagogues, and mosques as essential.

The designation came days after the arrest of Florida pastor Rodney Howard-Browne, who held two large, in-person services despite so-called “social distancing” guidance. Howard-Browne was charged with unlawful assembly and violation of a public health emergency order, which are misdemeanors.