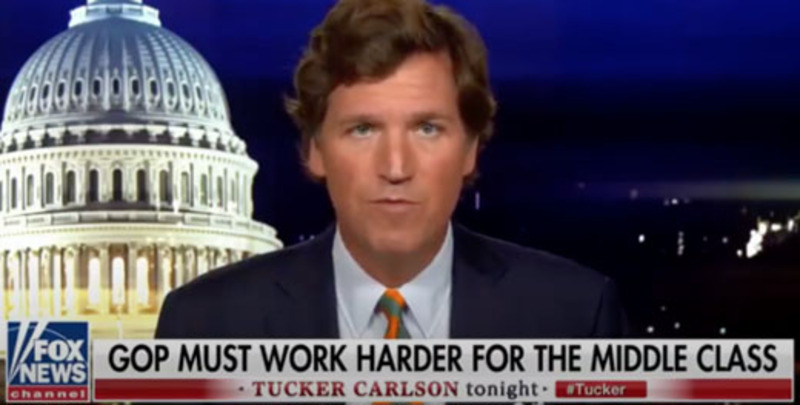 In his June 30 monologue, Fox News host Tucker Carlson said Republicans must lead the fight to stop the authoritarian hell leftists are preparing to create as the puppet masters of a President Joe Biden.

"Republicans at all levels could lose this fall. If they do, there will be profound consequences for you. People who supported Donald Trump will be punished, there's definitely no question about that. There's never been an American political party as radical and as angry as the Democrats are now. Imagine them with unlimited power and that's what they plan to get in their first year[.] ... The point is, and it could not be clearer: Non-Democrats in America are in peril," Carlson said.

Carlson, who has the highest ratings of any program in cable news history, invoked his interview with Sen. Mike Braun Monday night, in which analysts say the Indiana Republican came across very badly in defending his support of a bill to make it easier to personally sue and bankrupt police officers for alleged abuses, a move that some say would drive every home-owning cop out of his profession.

"Yes, the Republican Party, flawed and infuriating though it often is. The fact remains, the GOP is the only institution still open to the rest of us, to Americans who want to live as they did just 15 years ago, quietly, productively, without being harassed and harangued by self-righteous lunatics who mean them harm. And they do," Carlson said. "If you want to be left alone to do your job and raise your family in this country, you will need a protector. That protector must be the Republican Party. There are no other options, but it must be a very different kind of Republican Party."

Carlson predicted what the Democrats will do if they win the presidency and control of both houses of Congress, as current polling indicates they will. His predictions are based on what Democrats themselves have said.

• They will immediately grant amnesty to 20 million illegal immigrants and get them on the voting rolls, making it impossible for the Republicans to win any more national elections.
• They will abolish the Senate filibuster rule, allowing a 51-vote majority to pass into law anything they want.
• They will enlarge and pack the Supreme Court, eliminating the constitutional safeguard against tyranny.
• They will grant statehood to the District of Columbia, enlarging their Senate majority.

Carlson then laid out what he believes the GOP must provide voters if it is to save the nation from slipping into a one-party tyranny.

"First is vigorous defense of total equality under the law. We are equal because we are citizens. Every American has precisely the same rights as every other American. Period. That is the promise of America," Carlson said. "It's why millions of people move here for a long time[.] ... It was obvious, but it no longer is obvious. And there are many who are working in the opposite direction. Republicans must counterbalance this. They must work as hard as they can to make America fair again

"Don't get caught in pointless debates about whether or not this is a racist country," Carlson added. "Clearly it isn't. Prove it by making it less racist by making it a colorblind meritocracy. That's our promise."

Second: "We are not a free society without that," Carlson said. "This is not simply a debate about the First Amendment and its limits. It's bigger than that and more important. If you can't articulate something, if you're not allowed, you can't think. And that's precisely why authoritarians try to control language. They're trying to control your mind. Republicans should lead the fight against this without shame. Americans have the absolute right to tell the truth. This is not negotiable.

"Nor, by the way, is it a theoretical concern of interest only to intellectuals. Everything depends on it. If you can't think freely, you can't solve problems. Try to build a hydro plant or fly a commercial airplane. If certain categories of thought are off limits to you, it doesn't work. The power grid collapses. Planes crash. Society degrades. No speech means no science, no art, no civilization."

If the Republic survives in recognizable form, Tucker Carlson's challenge to the Republican Party last night will be recognized for its historic importance as a turning point. There will be "Tucker Carlson Awards for Journalistic Excellence," just as there are now at least five "Edward R. Murrow Awards" that invoke the name of the CBS journalist who is credited with calling out and sparking the downfall of Senator Joseph McCarthy for debasing the very important and legitimate cause of anti-communism with the sort of tactics we call "cancel culture" today.

Murrow got all this recognition in no small part because the left-wing media ideologically supported his position, while 90%+ of today's media are hostile to Carlson's point of view. But there was far more justice to McCarthy's charges of a real communist conspiracy than there is justice to claims that America is systemically racist and that cops are murdering blacks in an epidemic of racial violence. McCarthy was reckless and used despicable tactics at times, but there were no street mobs using arson and violence as his enforcers. Unless history is written by leftists after their revolution from above succeeds, Carlson's epic statement last night will be recognized as far braver and far more important than Murrow's McCarthy broadcast 66 years ago, at the dawn of television.