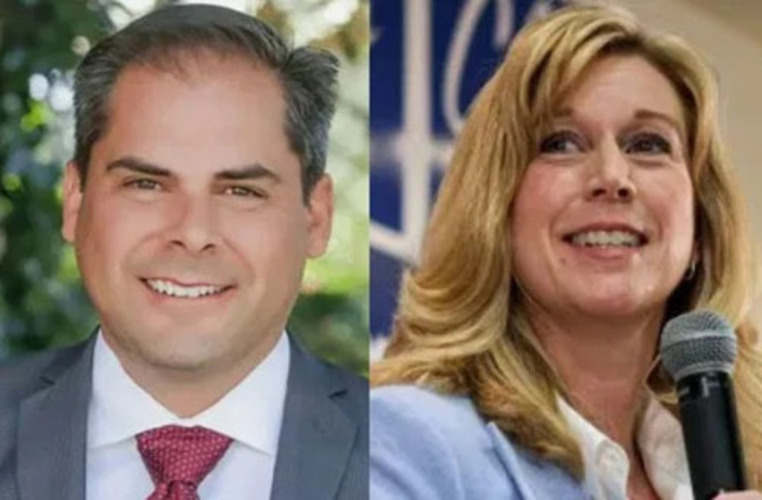 Republican Mike Garcia and Democrat Christy Smith are running in the May 12 special election in California's 25th District.
cal25 by N/A is licensed under N/A
FPI / May 11, 2020

The special election is between Republican Mike Garcia and Democrat Christy Smith. The winner will fill out the term of freshman Rep. Katie Hill, a Democrat, who resigned in October 2019 amid an ethics scandal.

Minnesota Rep. Tom Emmer, who chairs the National Republican Congressional Committee (NRCC), sent a memo to all House Republicans Saturday with an "urgent call to arms" that Democrats are trying to "steal" the election, Fox News reported.

"Governor [Gavin Newsom] of California won't let restaurants, beaches and stores open, but he installs a voting booth system in a highly Democrat area (supposed to be mail in ballots only) because our great candidate [Mike Garcia] is winning by a lot. CA25 Rigged Election!"

Garcia and Republican leaders slammed the county's decision to open a new in-person voting center Saturday in a more Democratic area of the district. They argue Democrats pushed for the extra voting location after seeing mail-in ballot returns were favoring the GOP candidate.

Fox News obtained a memo sent by Emmer to House Republicans on Saturday urging them to "raise hell" about the new voting center.

"We're issuing an urgent call to arms regarding the vote-by-mail CA-25 special election happening this Tuesday," Emmer wrote to his fellow Republicans.

Los Angeles County election officials announced the Lancaster voting center on Friday that will be open Saturday, Sunday and Monday for early voting. But Emmer said the Democrats in Lancaster already had access to a voting center in Palmdale, "which is a 10-minute drive from the new Lancaster center."

"It is very clear the Democrats are trying to steal this election and we need your help raising hell on social media, TV, radio, etc." Emmer wrote in the memo.

Amid the coronavirus pandemic, Newsom issued an executive order March 20 requiring all registered voters to receive ballots in the mail. In-person voting options were still required and would allow same-day voter registration opportunities.

GOP Chairwoman Ronna McDaniel tweeted: "Democrats are trying to steal the #CA25 special. Corrupt election official @DCLogan waited until Friday evening before the election to announce a single new voting location in a Dem-heavy area. Why? Dems demanded one. Help @MikeGarcia2020 fight back!"

McDaniel added: "Americans are on our side as we battle Democrats’ radical election lawsuits: 84% want ballot signatures verified, 67% oppose ballot harvesting, 79% prefer to cast ballots in person, 62% are concerned about fraud in a 100% mail-in system, 80% support voter identification".