Former President Donald Trump has said he will sue the Pulitzer Prize board if it does not "do the right thing" and take back the Pulitzers awarded to The New York Times and The Washington Post in 2018 for their coverage of alleged Trump-Russia collusion.

In a May 27 letter to Pulitzer administrator Marjorie Miller, Trump repeated his request, made "nearly eight months" earlier, that the board remove the awards given to the two newspapers, saying their coverage was based on “false and fabricated information.”

A Pulitzer has never been revoked.

“There is no dispute that the Pulitzer Board’s award to those media outlets was based on false and fabricated information that they published,” Trump said. “The continuing publication and recognition of the prizes on the Board’s website is a distortion of fact and a personal defamation that will result in the filing of litigation if the Board cannot be persuaded to do the right thing on its own.”

Trump continued: “We gain more and more clarity with each passing day about the propaganda and falsehoods that were pushed by the Clintons and their willing accomplices in the media about the ‘collusion’ that never existed between me, my campaign, my administration, and the Russian government Even the New York Times and Washington Post have effectively admitted this fact.

“Surely there must come to a point where it is simply embarrassing to your organization to stand by a prestigious Pulitzer Prize awarded to two alleged news organizations that have been conclusively and definitively complicit in promulgating lies about me.”

“I again call on you to rescind the Prize you awarded based on blatantly fake, derogatory and defamatory news. If you choose not to do so, we will see you in court,” the letter concluded.

In 2018, the New York Times and Washington Post shared the Pulitzer Prize for their national reporting of Trump’s alleged collusion with Russia. They were awarded $15,000 in a joint prize.

According to the Pulitzer board, the Post and Times received the award “for deeply sourced, relentlessly reported coverage in the public interest that dramatically furthered the nation’s understanding of Russian interference in the 2016 presidential election and its connections to the Trump campaign, the President-elect’s transition team and his eventual administration.”

Robert Morton, President of FreePressFoundation.org, said the future of American journalism is hanging in the balance.

“Either these awards should be rescinded or the New York Times and the Washington Post should uphold the highest traditions of the American Free Press and voluntarily surrender them,” Morton said. 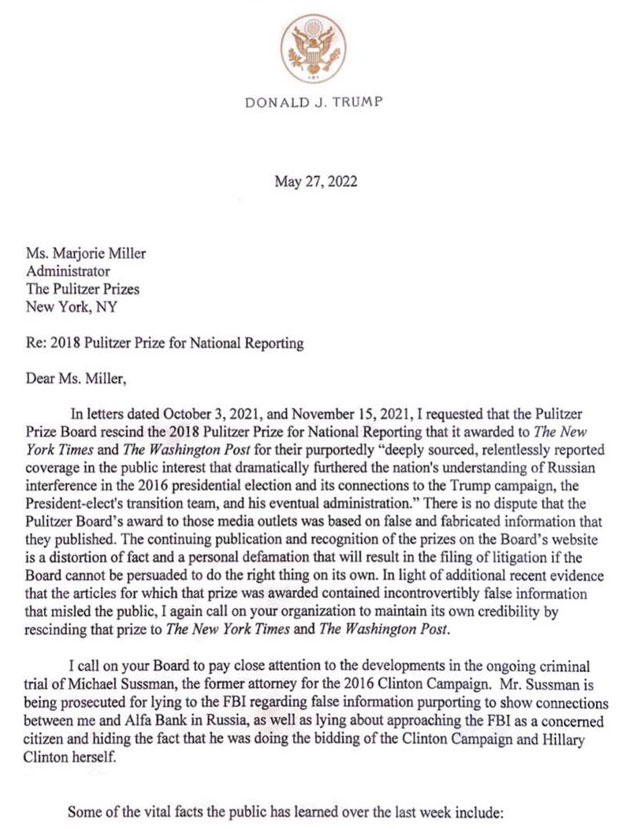 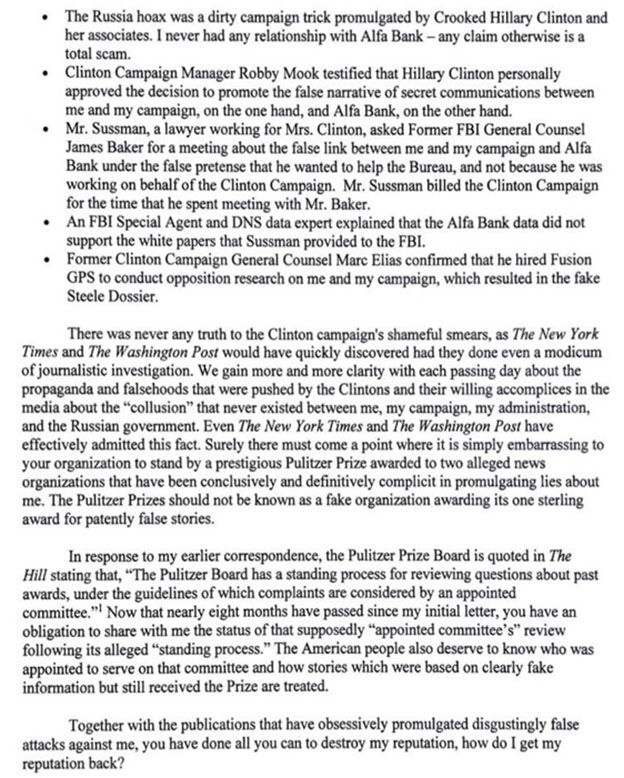 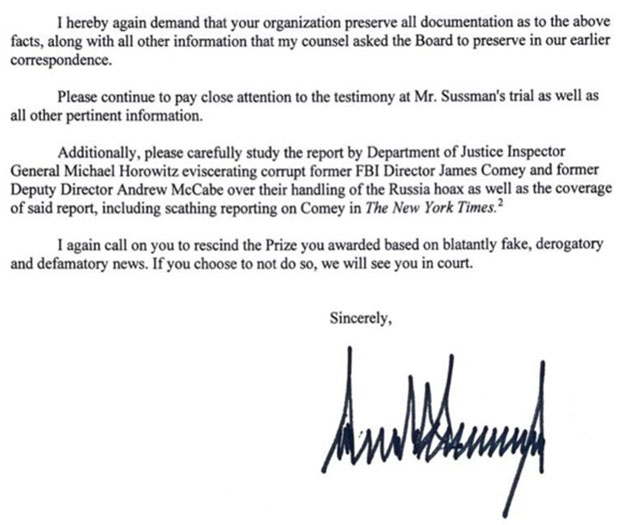 Who's who at the Trump-bashing New York Post
Media

Selling America, from sea to shining sea, to the CCP
Opinion

What must be done if Team Biden goes too far
Opinion