Save the Free Press: Fight Smart

by Romulus at Grok Trade

Russia released a list of demands last week that, if met, will lead to an immediate ceasefire. Stocks were down significantly prior to the release, then cut their losses in half. Now the markets hang in indecision. This is a demonstration of how sensitive the market is right now to the news in Ukraine.

There are two factors at play. Going back to November, we’ve seen three important lows in which traders swooped in and “bought the dip.” The first notable trait that all three lows share is that the selling did not escalate to "capitulation" status.

There is no exact, scientific mathematical formula that defines capitulation, but we haven’t seen it yet. Capitulation looks like March 15 through March 23rd, 2020, which marked the end of the COVID crash. It looks like November 2008 and March 2009, a four-month period that saw the end of the financial crisis. It is seen when well above average numbers of shares change hands at the bottom of a run. 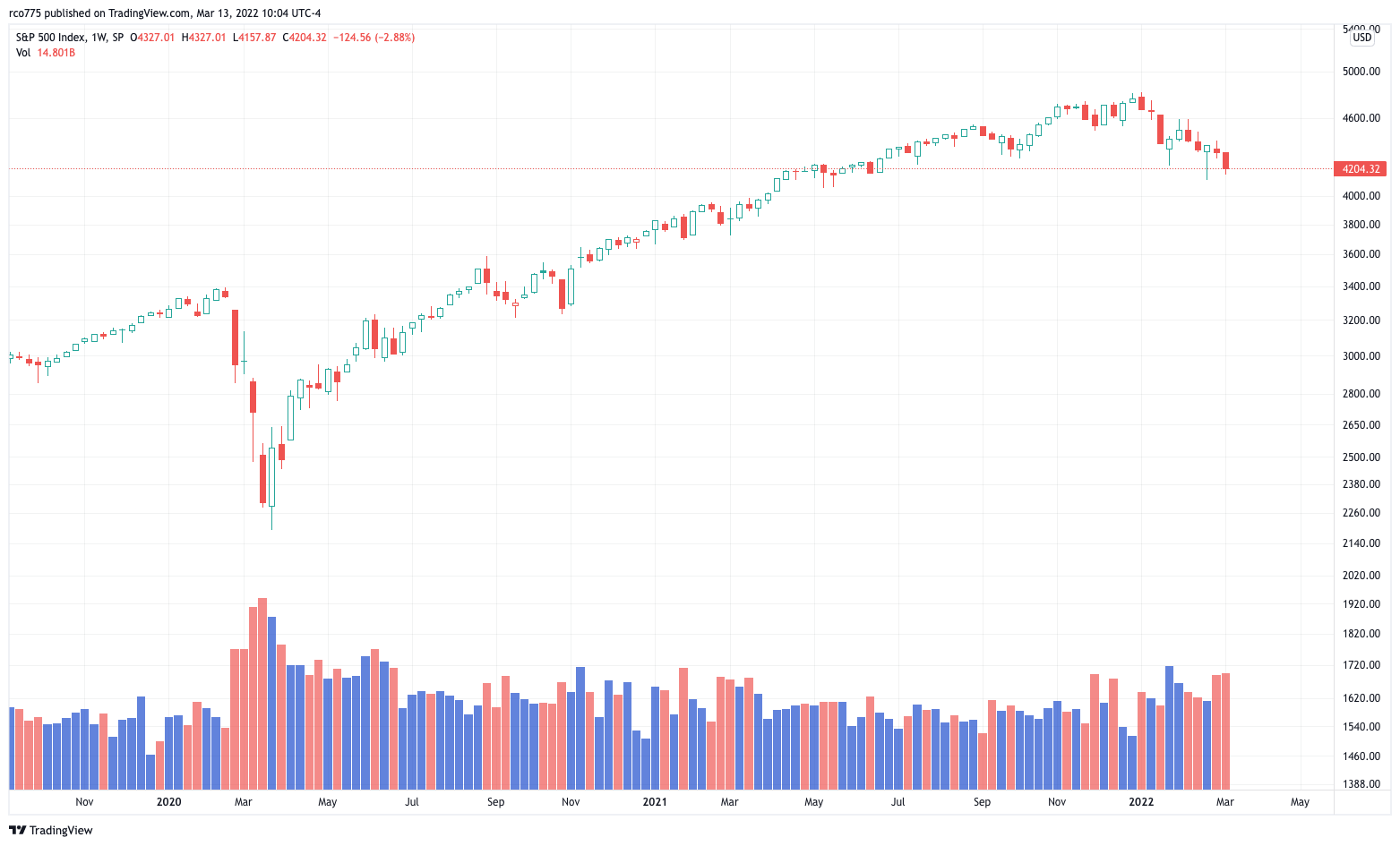 The second shared trait is the lack of follow-through to these “buy the dip” moments. A marginal new high occurred in early January after the November 26th hit, but the internal condition of the market did not match the price high in any category. Buying enthusiasm faded quickly in each case and stocks proceeded to reach new multi-month lows.

In these pages and to my traders, I have repeatedly mentioned the difficulty stocks face with embarking upon a sustainable upside move without either experiencing a capitulation period or a powerfully encompassing breakout. The current downdraft was preceded by intermediate and long-term signs of weakness that began forming last April and May, and lasted long enough for me to believe it will take months to repair the damage.

A peaceful resolution in Ukraine will produce a positive shock rally in the market, but it will most likely last only weeks or a few months before heavy selling returns. Peace will not solve the real problems that long-term investors have had with the market since last spring.

Valuation and inflation are the real problems. And prices have not dropped enough to justify large increases in equity exposure for big money players.

I still like the Cuban Missile Crisis as the analogy for today. Although the crisis was not officially resolved until November 23rd, 1962, stocks saw the ultimate low for that year in June, five months before the Soviet missiles turned around. By comparison, capitulation took place in June, something our current condition lacks. Then, the Dow Jones Industrial Average fell 27% from March 1962 to the June 26th low. Now, although small cap and technology stocks dropped 15% or more from their November highs, the Dow and the S&P 500 are off about 13%.

I still like our 2022 word of the year, PATIENCE. Hold onto this virtue, so that when stocks are ready to fly, you are, too.


This is a good time to remember that nothing moves in a straight line forever, and stocks are no exception. On the way to the ultimate COVID crash low on March 23rd, 2020, the market had five days of a better than 4% bounce. At this point it may feel like the market is going to keep falling every single day for the next several months. It will not. Even if we are thousands of points on the Dow away from the ultimate low — the one where we see that capitulation — it will not be a straight line that takes us there.

In the meantime, we will keep trading these temporary moves, and my longer-term money will keep sitting and waiting.

Wealth, like Rome, cannot be built in a day. But, like Rome, it can be lost in a day. Watch for future announcements from Romulus about profitable market moves, important indicators, and major market swings. For trading education, mentoring, or to beat the markets with Romulus' trading group, contact romulus@groktrade.com or go t0 www.groktrade.com/romulus.

About the author: In his real-life existence, Romulus started on Wall Street in 1994 and traded for a hedge fund for 13 years. Since 1994, he has called every major market top ahead of time and profited from them, including the break of the Dot-com bubble in 2000, the market crashes of 2008 and 2009, and the Covid crash of 2020. For the past 12 months he has been working with investors and traders to actively manage their portfolios by growing wealth, not risk, as a teacher and mentor working with Grok Trade, a stock trading educational company in business since 2007.

Thomas Sowell: America has reached the point of no return
Opinion

The Beijing dragon blinks, but this is not over yet
Opinion