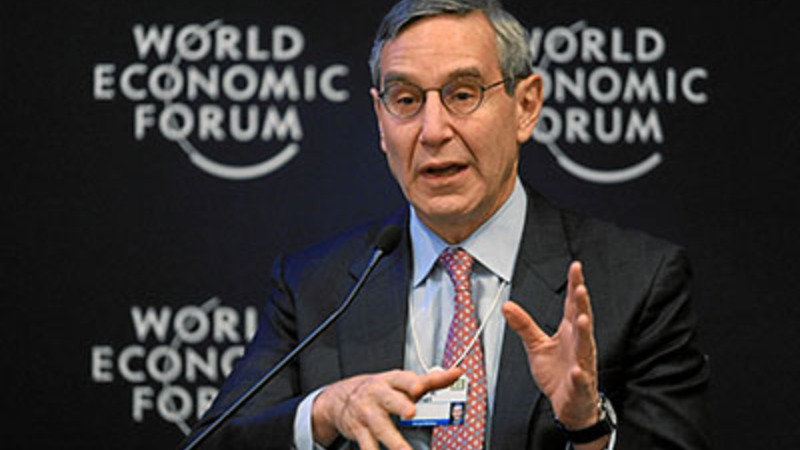 Richard Edelman, influential CEO of public relations powerhouse Edelman, made quite the splash at the World Economic Forum’s Davos 2023 annual meeting last week. Two of his revealing remarks were singled out and duly criticized in “conservative” circles, yet few (if any) of those chastising him were comfortable with even acknowledging the most frightening aspect behind what this man was espousing.

Edelman wholly identifies with the corporate wing of the new global order. As such, he clearly and unambiguously promotes the need for multinational business muscle to step in where government and NGOs have fallen short to usher in the elitist ruling agenda.

“So I think the first thing that business... needs to do is deprive [social media] platforms that spread disinformation of oxygen,” Edelman stated in one widely reported discourse, which even drew the attention of Elon Musk. “Stop advertising. Pull your promotion money. Make sure that they understand that they have a consequential impact on society. The boycott of Twitter for several months has had a modest impact. I think the Facebook one failed.”

Edelman also rushed to defend notorious progressive globalist billionaire George Soros and the NGOs he finances that wreak so much havoc in nations around the world.

“My hypothesis on that is right-wing groups have done a really good job of disenfranchising NGOs,” Edelman said in lamenting what he called a “deterioration in trust” in these hardboiled activist organizations that pose as public do-gooders. “They’ve challenged the funding sources. They’ve associated you with Bill Gates and George Soros. They’ve said that you’re world people, as opposed to actually what you are, which is local.”

Richard Edelman checks all the usual markers for the modern internationalist businessman. Along with serving as a member of the World Economic Forum, he is a board member of the arch-globalist Atlantic Council and the infamously pro-Beijing National Committee on U.S. China Relations. Edelman’s company is deeply tied to Chinese money. His enthusiasm for the bloody Asian communist superpower appears to be boundless.

In an April 2019 post on his company’s website, he hailed China's increasing dominance in Africa and praised a business model he claimed was focused on development of young workers and care for the customer:


I left China stunned by the ambition, the speed to market and use of technology to disrupt existing players. The U.S.-China trade war has certainly slowed business conditions in market. But the inexorable progress, the willingness to break with convention, makes China an agile and powerful competitor. The Chinese CEOs now seem ready for the first time to break with Confucian wisdom of doing more and speaking less. It is our moment to persuade them to speak out and lead from the front, respectful of the power of government but knowing that business is the true agent of change.

What he actually says here is quite shocking when one considers his Davos remarks. "Respectful of the power of government," he purrs, while declaring that big business is even stronger. Think about that. Edelman, the man who wants corporations to cement social media censorship on a massive scale, sees business as more powerful than an all-encompassing communist superpower social tyranny. There is no mistaking it. Edelman is a progressive ruling establishment social engineer who sees big business as the most potent means for installing the coming elitist tyranny. WorldTribune reported in 2022:

Business has emerged in the past three years as the most trusted institution in the Edelman Trust Barometer. Its greatest advantage is competence, more than fifty points higher than Government. This ability to get things done has led to an increased reliance on Business to step in where Government has failed on cross-cutting issues like climate action, workplace equity, structural racism, and sustainability. That means going beyond its core remit of financial performance, operational excellence, and innovation.

Edelman loves repeating his belief that authoritarian regimes are more “trusted” by their citizens than the democratic nations of the West. He couches it as a warning but at the same time does not conceal his admiration for the efficiency of tyrannical governance. From a 2022 Reuters report:


Edelman said higher public trust levels in China were linked not just to economic perceptions but also to a greater sense of predictability about Chinese policy, not least on the [coronavirus] pandemic.

"I think there is a coherence between what is done and what is said... They have had a better COVID than the US for example."

Chinese communist state propaganda has not failed to seize upon Edelman corporate operations to suit its purposes. A quick example: “China tops Edelman's global trust index,” a header to a 2020 YouTube video posted by the state-run Chinese English-language media outlet CGTN gushes. It makes perfect sense then that Edelman would be so casual in his own ardent support for authoritarian policies in the West. On the issue of gun control, he has openly stated that he sees an armed citizenry as a threat:


"Somehow, falling back on the rights of citizens to bear arms is just kind of an excuse for delaying what is inevitably in the interests of the communities."

In Jan. 2021, he asserted that "disinformation" was keeping people from getting their coronavirus vaccine shots:

"Vaccine hesitancy is completely tied to the disinformation that's come from social media" said @richardwedelman, CEO of @EdelmanPR at this week's New Economy Conversation with @abrownepek.

Register now for The Big "Bounce-Back" on Feb 23 https://t.co/xbKbphcaeV pic.twitter.com/83CulimmZi

Remarkably, he even acknowledged how deeply unpopular employer mandates were and then a few months later turned around and imposed them on his unfortunate employees: May 12, 2021:

"It's very important to understand that people don't want to be ordered to take the vaccine by their employer," CEO @richardwedelman tells CBSN. pic.twitter.com/VJWGyDPEpw

Executives from Edelman participated at the infamous Event 201, the practice run for the contrived coronavirus global social tyranny. As we wrote in May 2020:


Corporate players and globalist health advocates all planning ahead in October for a big event that will thrust them into positions of vast influence, and then the coronavirus hits a few months later and everything they had envisioned for themselves starts to take shape. Just a coincidence?

Here is Edelman again on his corporate website, crying about poor George Soros being maligned in July 2022:


Trust Issues with Global NGOs – The campaign against the Open Society Foundation hurt the entire sector. NGO work was politicized and unfairly maligned by right wing politicians, starting in Eastern Europe but magnified by the conservative press in the U.S.

He stressed that Big Business is eclipsing NGOs in terms of enacting social change:


Business Has Seized the Purpose Banner from NGOs – This may be the most important finding from the lunch. Civil society leaders feel preempted by business, making claims of solving societal problems as part of the normal activities of the enterprise.

This paragraph is the core of what Richard Edelman is about:


The fundamental question to be answered by the sector is whether it is willing to take the risk of partnering with business. The traditional answer of NGOs has been no; we prefer to go it alone. That is the wrong response today; society demands solutions that can only be provided by cooperation with a business community that has fundamentally changed, that sees its own mission as societal and financial. There is a way forward together; it is time for civil society to take this new road.

It's a hard truth that far too many “conservatives” still do not want to face up to: multinational corporations are taking a leading role in the creation of the new global order that threatens human existence today.