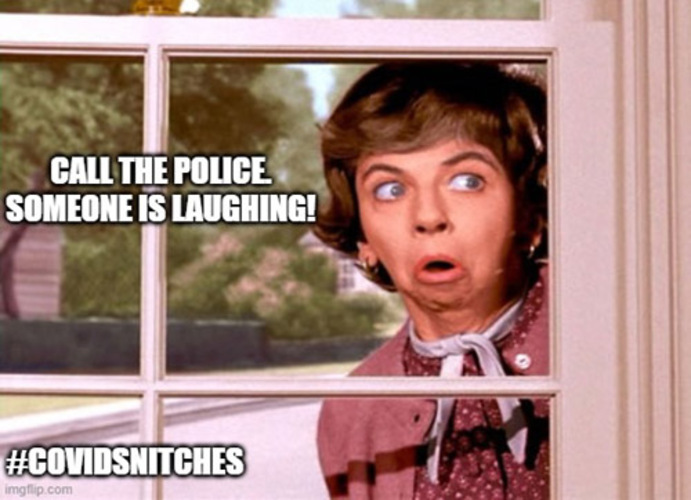 Thinking of hosting a party with more than 10 people? If you live near a Democrat, you may want to think again, according to a new poll.

A new Just the News Daily Poll by Scott Rasmussen found that Democrats are far more likely than Republicans to say they would report neighbors for holding a social gathering that would violate coronavirus lockdown orders.

"There is a huge partisan difference," Rasmussen said. "Other data I’ve released shows that a plurality of Republicans now believe the worst of the pandemic is behind us. Democrats strongly disagree."

The poll found that 44 percent of Democrats say they would snitch on a neighbor while 31 percent would not. For Republicans, 60 percent would not turn in so-called coronavirus scofflaws compared to 25 percent who would.

The national survey of 1,200 registered voters was conducted April 23-25 by Rasmussen.

"In China, in every apartment building and in every block, there’s always at least one person who is the local Communist informant, ready to fink out anyone who does anything of which the government might not approve," Arama noted in a May 4 op-ed.

"Now, with all the stay-at-home orders and various social distancing rules, various local governments have established a process where you can report on your neighbor for violating the rules."

In New York City, Mayor Bill de Blasio asked people to call in to a snitch line "and many responded as they should to such a request: they posted pictures of him violating his own orders. He was so shamed, the tip line ended up getting shut down," Arama noted.

The Daily Mail noted that, in Tulsa, Oklahoma last month a bar owner said more than a dozen motorcyclists showed up unannounced, but he served them a round of shots anyway to celebrate a birthday.

Another bar live-streamed a drag queen show on Facebook while up to 20 people drank inside, ignoring police when they knocked on the door.

"Both were busted — and received misdemeanor citations and court dates — after police responded to tips that the bars were violating the mayor's order shuttering all nonessential businesses to help slow the spread of the coronavirus," the Daily Mail reported.

In some places, investigators are patrolling the streets, looking for violators.

A team enforcing Denver's shelter-in-place order issued five citations — including to Hobby Lobby and a Game Stop franchise that claimed it was essential — and more than 600 warnings to businesses and individuals as of last month, city spokesman Alton Dillard said. The team also patrols neighborhoods, parks and recreation areas.

In Newark, New Jersey, police shut down 15 businesses in one night and cited 161 people for violating the governor's restrictions, saying others would be next if they didn't heed directives. And Maryland State Police said they'd conducted nearly 6,600 business and crowd compliance checks.

In Missouri, "it was a bit more problematic. We appear to have a lot of folks willing to turn in their neighbors," Arama wrote.

In St. Louis County, in Missouri, "they had a website and more than 900 people snitched on people and businesses, resulting in 29 businesses being cited," Arama noted.

The people who were snitching were required to fill out a form with their names and contact information. The form had a warning that information could be made public pursuant to the Sunshine Law.

"So in a rare instance of karma, the snitches were themselves outed or snitched on," Arama noted.

The St. Louis County executive's director of communications, Doug Moore, explained that they are not allowed to redact the names of people who snitch.

"In this particular instance, our county counselor's office consulted with the [attorney general]'s office on releasing the list of those who had filed complaints against county businesses," Moore said. "We were told all the information was public and we should not redact (except for HIPAA information). Withholding information goes against what journalists push us to be — as transparent as possible."

“Here, ya go. The gallery of snitches, busybodies, and employees who rat out their own neighbors and employers over the Panic-demic,” the Facebook post said. "If they are worried about retaliation, they should have read the fine print which stated their tips would be open public record subject to a Sunshine request, and should not have submitted tips in that manner to begin with. I released the info in an attempt to discourage such behavior in the future."

The person who posted the information to Facebook added: "I’d call it poetic justice, instant Karma, a dose of their own medicine. What goes around, comes around. They are now experiencing the same pain that they themselves helped to inflict on those they filed complaints against."

Arama concluded: "It’s hard not to feel that there’s a little bit of turnabout is fair play for them being outed and be disturbed by government encouraging people to fink on their neighbors for daring to walk out of their house or go to the beach."