NYT and Kinzinger answer the ‘Who is Ray Epps’ question 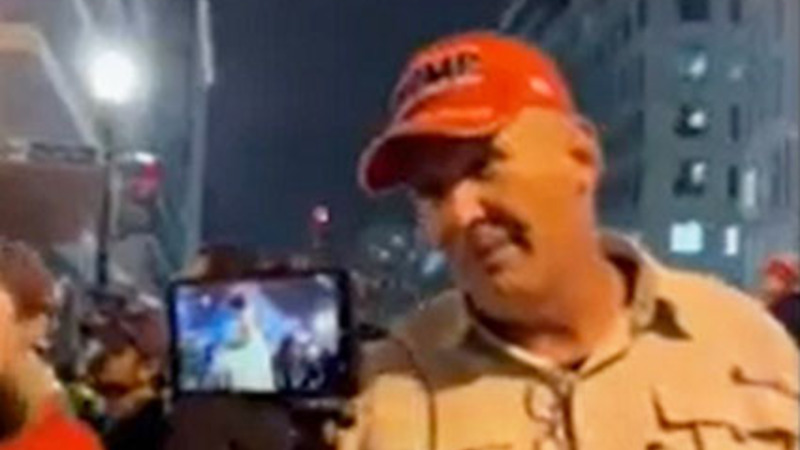 Ray Epps is the only person caught on camera repeatedly directing people to enter the Capitol building. Video of Epps egging on protesters to go into the Capitol was captured on Jan. 5 and Jan. 6, 2021.

The New York Times and anti-Trump Rep. Adam Kinzinger have come to the defense of Epps.

The Times on July 13 published what Revolver News characterized as "a highly sympathetic puff piece" which attempts to write off any talk of FBI involvement in Jan. 6 or of Epps being an asset of the feds as a "conspiracy theory."

Kinzinger, the Illinois RINO who is not running for re-election, said: “I know this will break some hearts. For a few months, people like Tucker Carlson, MTG, Gaetz, and now Cruz have been ‘just asking questions’ about a man named Ray Epps. He was on video the day before Jan 6 saying ‘we’re going INTO the capitol!’ The some in the crowd chanted ‘fed fed fed.’ Why? Who knows, maybe they knew he was videoed talking about breaking into the Capitol the day before it was to happen and wanted to create distance?”

Kinzinger continued: “Regardless, he was put on the FBI wanted list, then removed. Because of all of that, the conspiracy that he was an FBI agent has been gospel on the blogs and shows. — side note — this is why we have to address conspiracies not ignore them. He didn’t enter the Capitol on Jan 6, and was removed from the most wanted list because apparently he broke no laws.”

In a July 14 analysis exposing the "hidden agenda" of the NY Times article, Revolver went straight to what it noted was "the buried lede."

The analysis referenced a text message Epps sent to his nephew describing how he “orchestrated movements of people” to the Capitol after President Donald Trump’s speech:

"Mr. Epps also said he regretted sending a text to his nephew, well after the violence had erupted, in which he discussed how he helped to orchestrate the movements of people who were leaving Mr. Trump’s speech near the White House by pointing them in the direction of the Capitol."

Revolver noted: "Will this text message soon become a matter of public record? What exactly is Epps’ phrasing? Will other Ray Epps communications soon come out that will further clarify this sudden need for aggressive damage control?"

Revolver's analysis said that it is "also important to note" that the New York Times article "contains no explicit denial by Epps of association with military intelligence, DHS, JTTF, or any cutouts or intermediaries."

The analysis wondered if the author of the New York Times piece, Alan Feuer, "could clarify for the record: did he ask Epps if he had any association with any intelligence agencies or cutouts of such agencies? If so, what did he say? If not, why not?"

Feuer’s NYT piece describes Epps as a Trump supporter: “Epps traveled to Washington to back Mr. Trump”… and that he “took a last-minute trip to Washington for Trump’s speech about election fraud.”

The only problem, the Revolver analysis noted, "is that Ray Epps didn’t go to Trump’s speech. That’s right, this alleged Trump supporter traveled all the way from Arizona to D.C., and didn’t even attend Trump’s speech. Instead, he spent the evening of January 5th and the morning of the 6th telling people to go into the Capitol."

Revolver also pointed out that the purpose of Select Committee investigation Jan. 6 "is to figure out what caused the events of the 6th. Epps was calling for people to go into the Capitol the evening before. Wouldn’t it be newsworthy to know where Epps got the idea, and why he was so doggedly fixated on that particular mission?"

The fact that these questions were not been asked in the Epps puff piece "indicates that this is one of the sloppiest and most transparent cover-up jobs in New York Times history — a total Feuer job," Revolver noted, adding that the Times piece "attempts to wave off Epps’ January 6 participation as negligible — similar to those who committed minor offenses and weren’t charged."

Revolver continued: "Yet Epps is the key person caught on video with an advance plan to go into the Capitol. He’s there the morning of the 6th directing people to the Capitol, and he’s right up at the barricade during the initial breach, after which he rushes into the restricted zone. Note that many others, including Jeremy Brown, Owen Shroyer, Mark Ibrahim, Couy Griffin, have been hit with trespassing charges for this."

Revolver also noted that "not enough has been said" about the significance of the following video in which Epps says “WHEN we go in, leave this here.” Epps says this just minutes before the initial breach of the Capitol grounds:

Revolver News concluded: "The bottom line here is that Ray Epps is the smoking gun of the Fedsurrection narrative. ... If it turns out Epps was acting on behalf of some government agency on January 6, the entire official narrative collapses in one fell swoop. Now, the New York Times is kicking off a massive damage control campaign to make any unsanctioned ideas about Epps too toxic and dangerous to print. Regime janitors like Feuer, who specialize in mopping up Fed dirty work, will go into overdrive as more embarrassing information about Ray Epps and the initial breach comes out.

"We’re on to their game — it’s too late. The Times piece reports that Ray Epps just wants the truth to come out. Let it be so, and stay tuned for much more."