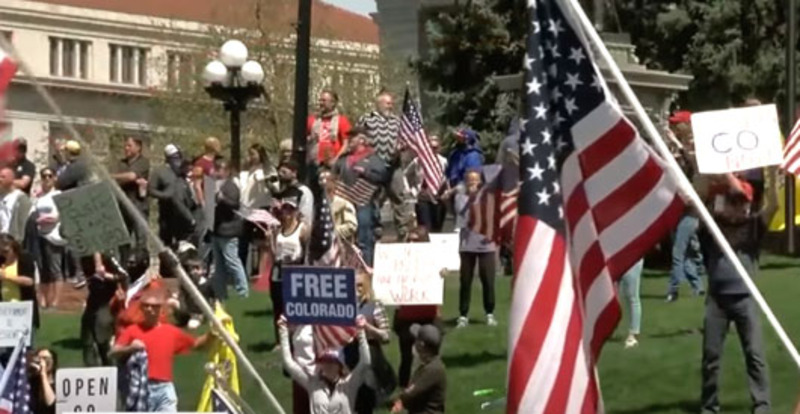 Demonstrators in Denver call on Colorado officials to re-open the state.
denvercovd by N/A is licensed under N/A
FPI / April 28, 2020

Government-imposed "totalitarianism is not going over well in the land of the free," a columnist noted.

Oppressive "stay-at-home" edicts issued by Democrat governors and mayors nationwide not only give "their subjects a dramatic demo of who they really are," they are boosting President Donald Trump who is eager to re-open the country, Joy Overbeck wrote for American Thinker on April 27.

"This Wuhan communist disease has ripped the face masks off a gang of Democrat governors and mayors who exhibit disturbing symptoms of the Little Dictator Virus," Overbeck wrote in a piece titled "Thank You, Democrat Governors, for Re-Electing President Trump!"

Americans "will not tolerate their lives frozen by government when the disease statistics don't justify the severity of the shutdown," Overbeck wrote. "We chafe against edicts that we can see are irrational, unreasonable, and often simply preposterous, just as the colonists chafed against the laws of George III. These rallies across the country give voice to the American spirit — energetic, industrious, hopeful, and freedom-loving — re-awakening from its coma."

Overbeck noted several examples of Americans "rising up" against "officials restricting their lives and destroying their livelihoods in ways unheard of here before now."

• In Denver, Colorado on April 19, "thousands staged a drive-by car protest, honking horns and flying flags for hours on streets around the Capitol. A thousand more families and friends gathered happily on the Capitol lawn to cheer them on with homemade posters pleading with the Democrat governor to let them get back to work. Facebook censors shut down the main group, Operation Gridlock Denver, the morning of the protest, but since many groups were publicizing the event, it wasn't hard for people to find information. Mark Zuckerberg has acknowledged that Facebook has decided that these rallies are 'harmful disinformation,' so they will protect us by eliminating it. Nevertheless, the Denver Gridlock was a spectacular success. Next day, Denver's mayor (Democrat Michael Hancock) demonstrated just how successful it was by banning Frisbee- and football-tossing!"

In Colorado, Overbeck noted, "shopping centers are empty of cars. Everywhere, a once-thriving state looks like a low-budget end-of-the-world disaster film. Realtors risk a $1,000 fine and a year in jail if they show clients a home. Is this shutdown justified because Colorado is in the midst of a terrible virus death wave? Well, no. According to the Colorado Department PHE, the state hit its high of hospital admissions at 130 on April 2, declining to 26 on April 15. As of April 25, the state had 672 virus deaths in a population of nearly 6 million. We aren't allowed to go to work, socialize, or shop for anything but groceries — oh, except that the liquor stores and marijuana shops are open, collecting lucrative taxes for the state. And of course, Planned Parenthood is open as an essential business."

• "Americans want to know where they go to get their constitutional rights back," Overbeck wrote. "Don't ask New Jersey's Democrat Gov. Phil Murphy, who laughingly admitted to Fox News's Tucker Carlson that the founding document listing our God-given freedoms is "above my pay grade." He told Carlson, "I wasn't thinking about the Bill of Rights when I did this" — meaning when he locked down his state.

• And then "there's the most infamous Democrat despot governor of all, Michigan 's Gretchen Whitmer, who decreed that people could buy food and medicine from certain stores but not paint or seeds to plant in their spring gardens," Overbeck wrote. "Enforcement demanded actually roping off the forbidden parts of stores. The choice of 'essentials' here is interesting. Even though her citizens are being good little sheeple, staying inside, this Democrat Maleficent wants to prevent them from doing something constructive, like painting, or happiness-making, like gardening. Whitmer's order also bars people from fun on their motorboats even though it permits paddling kayaks and canoes. But of course — an obvious slap at gas-powered toys upholds the Democrats' greenie agenda."

• "We are not stupid, and we are not reckless. We see that in California, a state of 40 million people, there are only 1,651 deaths," Overbeck noted. "Yet California has probably been dealing with the virus, unseen and unknown, since November, with thousands of likely infected Chinese flying into LAX during those months. But what Gavin Newsom calls 'home isolation' has been in effect only since March 20. At that time, the Democrat governor predicted from 'models' that over half the state's population — about 25.5 million — would be infected in the next eight weeks. He was spectacularly wrong."

• In Kentucky "angry protesters shouted down Democrat governor Andy Beshear's virus update, yelling, 'Open up Kentucky'; 'Facts over fear'; and, most tellingly, 'We want to work!' Work and earning a paycheck are essential not only to our financial lives, but also to our self-respect as productive Americans. But Governor Beshear scolded these citizens who want only to provide for their families, saying: 'Folks, that would kill people. That would absolutely kill people.' "

As of April 25, Kentucky had 205 coronavirus deaths with 3,905 confirmed cases in a population of 4.46 million. Beshear's March 15 statewide "healthy at home" order closed down all "non-essential" businesses, which includes "about everything except grocery stores and, of course, Planned Parenthood," Overbeck noted.

• New York's Mayor de Blasio announced a modern way to punish upstarts who violate social distancing. Take a picture of the offender with your phone and text it to the authorities, whereupon, he warned, "action will ensue" — such as a $500 fine. The Los Angeles mayor followed suit, promising that "snitches will be rewarded."

In Philadelphia, four police officers wrestled a man off a bus for the crime of not wearing a mask, with a half-dozen police looking on. "The officers were not practicing social distancing," Overbeck noted. "Nor were the police arresting the surfer in California on an empty beach. Other states threatened drive-in worshipers at Easter and even ticketed and fined them."

In many states, "the small number of infections and deaths doesn't justify the extreme shutdown orders," Overbeck wrote. "Yet governors and the media brand citizens protesting government-forced idleness murderers. So selfish to want an active, productive life and maybe even chalk up a few dreams fulfilled! Much better to stay home and let Almighty Government take care of you with never-ending barely life-sustaining checks while you laze and graze around the house, bust out of your fat jeans, and surrender to all PJs all the time.

"This is the Democrats' plan for America."