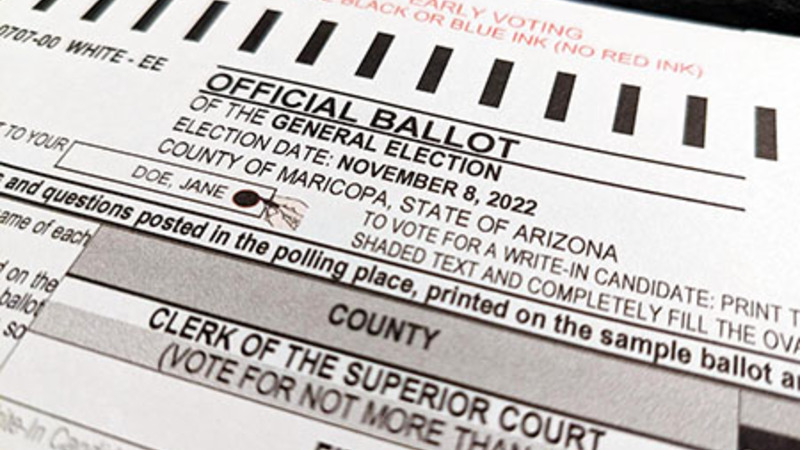 Testimony and eyewitness accounts from the election lawsuit filed by Arizona Republican candidate for governor Kari Lake include allegations that 25,000 extra votes, enough to swing the margin of victory to Democrat Katie Hobbs, were added to Maricopa County's official tally as election officials failed to implement the required chain-of-custody documentation for Election Day drop box ballots.

While most conservative media have moved on from the systemic failure in Maricopa County's handling of the Nov. 8 midterms, The Federalist's Victoria Marshall on Jan. 18 detailed what Lake's team contends is a violation of state law.

"It was about 10:00 on election night when Maricopa County’s ballot tabulation vendor, Runbeck Election Services, received its first truckload of Election Day drop box ballots. While Runbeck received seven truckloads total (the last was completed about 5 a.m. the following morning), Runbeck staff thought it odd the deliveries did not come earlier throughout the day. But that wasn’t the only glitch. There were no chain-of-custody forms delivered with the ballots, a stark departure from typical procedure," Marshall noted.

In a sworn affidavit, Runbeck employee Denise Marie said that, prior to Election Day, drop box ballots were “delivered in red bins with a chain of custody form” from the Maricopa County Tabulation and Election Center (MCTEC), which listed how many ballots were delivered.

But on election night, “instead of receiving the ballots in red bins, the ballots from the drop boxes had been placed in mail trays and loaded onto mail cages. MCTEC did not include the Maricopa County Delivery Receipt forms with any of the Election Day drop box ballot deliveries. There were no chain of custody forms with the ballots and no count of the number of ballots that were delivered,” Marie said.

Lake's attorney, Kurt Olsen, said Maricopa was in direct violation of the Arizona state statute which requires the county recorder to maintain records that log the chain of custody for ballots “during early voting through the completion of provisional voting tabulation.”

At a Nov. 9 press conference, Maricopa County Recorder Stephen Richer affirmed Runbeck’s estimate by saying the county had received an unprecedented 275,000 drop-off ballots on Election Day. That same day, Maricopa County reported the total number of ballots cast in the 2022 general election to the Arizona Department of State: 1,136,849 ballots, with 407,664 ballots left to count — 1,544,513 ballots total.

Around 5:30 p.m. on Nov. 9, Maricopa County "asked Runbeck to calculate the total number of Election Day drop-off ballots received, according to Marie, who was tasked with running the tabulation herself. Marie found that Runbeck’s records showed 298,942 drop box ballots had been received and scanned on Election Day," Marshall reported.

Marshall continued: "As a result of such a discrepancy between the estimate and the official tally, Maricopa County sent a new vote tally to the Arizona secretary of state’s office on Nov. 10 (earlier that day, Richer had sent an email to the Maricopa County Board of Supervisors admitting he could not reconcile the differences between the county’s numbers and the secretary of state’s listing, demonstrating that even the supposed expert official in charge of the counting process couldn’t figure out where the extra ballots came from). Instead of the original 1,544,513 total ballots reported for the 2022 general election in Maricopa County, the secretary of state’s website now listed 1,569,603, a more than 25,000-vote discrepancy with no explanation. That same day, Maricopa County gave another press conference, stating it had received 292,000 Election Day drop box ballots without batting an eye.

"Arizona law requires the county recorder to show the origins and chain-of-custody documents for every drop box ballot obtained. According to Runbeck employee Denise Marie and Maricopa County Co-Director of Elections Reynaldo Valenzuela, Maricopa County violated state law by failing to create any chain-of-custody documentation for the drop box ballots received on Election Day. Because of this failure, no records exist to dispute or reconcile the discrepancy between the number of ballots Runbeck first reported (263,379) and its final tally (298,942), a more than 35,000-vote change."

As Olsen remarked in his closing argument for the Lake trial: “If you don’t have a count from MCTEC when those ballots are being transported to Runbeck, how do you know whether that count is secure?”