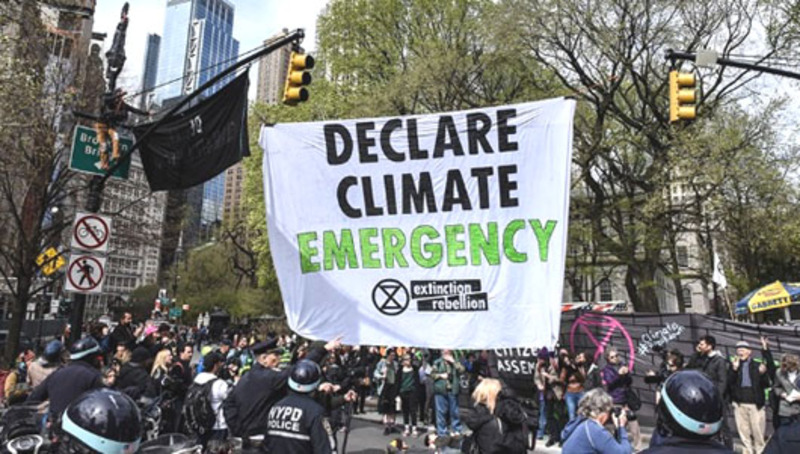 Climate alarmists are using the coronavirus health crisis as a "dress rehearsal" for what they call the "climate emergency," analysts say.

"Even as Americans chafe under job losses and social restrictions, environmentalists see a 'silver lining' of falling global emissions while drawing comparisons between the pandemic and the 'climate crisis,' " Washington Times reporter Valerie Richardson noted on April 22, which marked the 50th anniversary of Earth Day.

Climate Depot’s Marc Morano warned that many of the climate alarmists' goals — reduced air travel, driving and manufacturing — have been achieved by lockdowns to slow the spread of the coronavirus.

“One thing Greta and all the other climate activists know is that their alleged ‘solutions’ to climate change require many of the massive expansions of governmental power that is occurring under the virus lockdowns,” Morano said. “They are perplexed as to why people are not taking their ‘climate emergency’ seriously but are taking COVID-19 seriously.”

The World Meteorological Organization said Wednesday that the pandemic shutdown is expected to reduce greenhouse gas emissions this year by 6 percent, the biggest one-year decline since World War II and a decrease in line with a recommendation from the UN Intergovernmental Panel on Climate Change.

Richardson asked: "Now that people know what it takes to plug global emissions, will they be willing to do it again?"

Don’t count on it, said JunkScience’s Steve Milloy, who said the pandemic is likely to kill the public’s appetite for social and economic restrictions.

“People are willing to endure this temporarily, but people are getting tired of it already, and it’s only been three weeks,” said Milloy. “[The activists] would like to take the coronavirus police state and turn it into the climate police state, and I’m just not sure the public is going to want to go from this police state into the next one.”

Bill McKibben, founder of the climate group 350.org, said the “clear skies of this spring, and the overall reckoning of a deathly pandemic” may have strengthened the public’s resolve.

“Who, once they’ve seen the mountains in sharp relief, wants to go back to the haze?” McKibben asked in a Tuesday op-ed in the Los Angeles Times. “Who, now that they have to focus on the health of their lungs, wants to breathe that crap? Who, now that we’ve seen how fast good governments can move, wouldn’t want to use this moment to help avert the even more dangerous crises that global warming is sending our way?”

Comparisons to the COVID-19 pandemic were replete during Earth Day events. In his statement, UN Secretary-General Antonio Guterres said the pandemic was an “unprecedented wake-up call” that could become a “real opportunity to do things right for the future.”

“The impact of the coronavirus is both immediate and dreadful. But there is another, deep emergency: the planet’s unfolding environmental crisis,” Guterres said. “Climate disruption is approaching a point of no return. We must act decisively to protect our planet from both the coronavirus and the existential threat of climate disruption.”

Numerous articles have referred to “flattening the curve” on climate change, the same language used to describe a plan to reduce the number of COVID-19 cases.

As Newsweek put it in an April 11 headline: “Scientists cite pollution decrease in calls to ‘flatten the curve’ of climate change post-coronavirus.”

“Scientists, activists and religious leaders ranging from Pope Francis to filmmaker Spike Lee are highlighting lockdown reductions in air pollution and nature ‘coming alive’ as part of a larger call to permanently change industrial and economic behavior after COVID-19,” the article said.

Green New Deal author Rep. Alexandria Ocasio-Cortez said in a now-deleted tweet that “it’s the right time for a worker-led mass investment in green infrastructure to save our planet.”

“Because what we cannot afford to do is to jump out of the frying pan of COVID and into the raging fire of climate change,” Figueres said.

Former Vice President Al Gore and others have sought to link the coronavirus and climate change by claiming that air pollution can worsen COVID-19 symptoms.

Now that Americans understand what it costs to reduce greenhouse gas emissions, however, the question becomes whether they are willing to pay.

“There are trade-offs,” said Southern Methodist University economist Bernard Weinstein. “If we shut down industrial enterprises all over the world for a long period of time, we will see improved air and water quality. But at what human and economic cost? That’s really the underlying debate going on right now about how and when to open the economy in the U.S.”