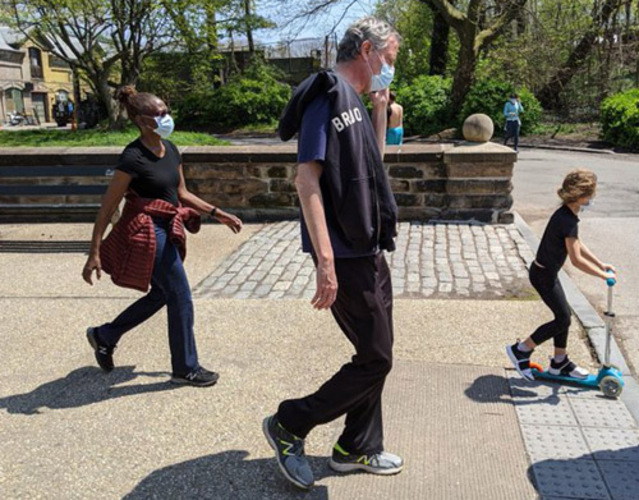 NYC Mayor Bill de Blasio and wife wife Chirlane McCray on a 'non-essential' stroll in the park.
deblahsio by N/A is licensed under N/A
FPI / April 29, 2020

Earlier this month, New York City Mayor Bill de Blasio urged New Yorkers to rat out any neighbors who were not in lockstep following his coronavirus social distancing orders.

The mayor even set up a snitch line for citizens and urged them to take photos and videos of anyone violating social distancing mandates. He also threatened to dole out $1,000 fines for those who failed to heed his warning.

“In war times, in a time when people’s lives are threatened … I’m sorry, this is not snitching, this is saving lives,” de Blasio said. “You’ve got to do it. We need those photos. We need those locations so we can enforce right away.”

But was this just "do what I say, not what I do" orders from a Democratic overlord?

A New York citizen on April 25 captured video of de Blasio and wife Chirlane McCray taking what was described as a "non-essential" stroll through a park in Brooklyn that was 11 miles from the mayor's home, Gracie Mansion in Manhattan.

The citizen, Darren Goldner, said he didn’t think it was fair that de Blasio was at the park while he has been lecturing New Yorkers about staying indoors and avoiding parks and recreational areas.

Goldner tweeted: "I live right near Prospect Park. It's a nice place to exercise at distance. Today, I ran into @nycmayor @billdeblasio w/ @nycfirstlady there. But they live 11 miles away *inside* another park and force a 4 SUV entourage to drive them non-essentially to Bklyn for recreation".

De Blasio was seen waving his hand dismissively towards the camera as he walked away from his angry constituent saying, "Come on guys, give it a break." Goldner fired back, "I’m not going to give it a break. This is selfish behavior. This is so terribly selfish. You call yourself a progressive but you chauffeur yourself to Brooklyn you force people to drive you. This is ridiculous. This is the epitome of non-essential travel."

RedState's Kira Davis noted in an April 27 op-ed that de Blasio was practicing "Quarantine for thee but not for me!" in what was "yet another glaring example of the disconnect between elite and working America."

Davis added: "New Yorkers have been hit hard and have been sacrificing greatly to bend this curve. Instead of a mayor who leads by example they have one who continues to flaunt his power and wealth. From de Blasio’s strolls in the park and trips to the gym to Nancy Pelosi’s freezer full of ice cream, the Democrat message in this country is becoming clear…