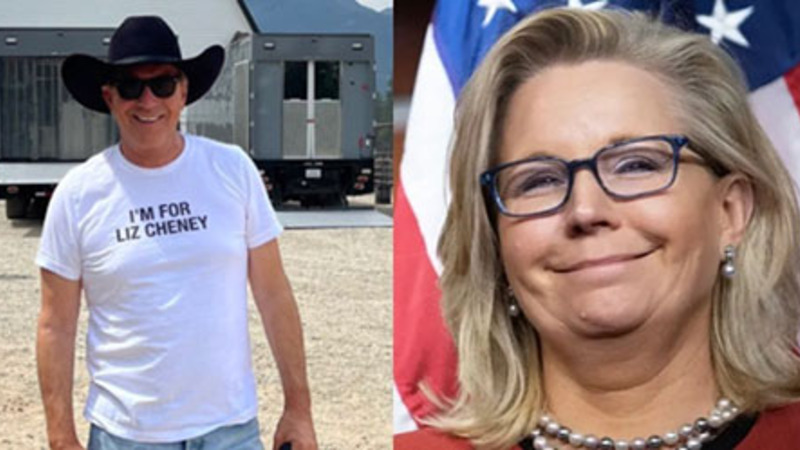 Kevin Costner is apparently a supporter of Rep. Liz Cheney.
costchen by N/A is licensed under N/A
FPI / August 5, 2022

Wyoming RINO Rep. Liz Cheney is touting how she has been endorsed by leftist actor Kevin Costner.

But are there enough leftists, Costner fans, or "Yellowstone" fans in Wyoming to erase the huge deficit Cheney faces in her GOP primary race with Trump-backed Harriet Hageman?

Cheney tweeted a photo of Costner in an "I'm for Liz Cheney" t-shirt, writing: "Real men put country over party."

Among the responses was: "Liz couldn’t find a Wyoming voter that supports her, so — naturally — she had to settle for an actor that lives in Colorado. Sounds about right."

It's a safe bet that there are many more Trump America First supporters than Costner fans who will be voting in Wyoming's Aug. 16 primary election. The 22-point lead for Hageman over Cheney in recent polling would appear to confirm that.

“ ‘Yellowstone’ is a good show, but Kevin Costner is a pretend rancher in a Hollywood production shot mostly in Montana, not Wyoming,” Hageman told the Daily Mail. “And I’d bet that if he had to work a real ranch for a day, he’d call his agent to get him out of there. I’ll take the support of the people of Wyoming any day of the week over a liberal actor who voted for Joe Biden.”

The Casper Star-Tribune on July 25 reported on a new poll: “Natural resources attorney Harriet Hageman leads Cheney 52% to 30%. No other challenger received more than 5% support. Only 11% of voters were undecided.”

Brad Coker, the managing director of Mason-Dixon, the firm that conducted the poll, said of the results: “The big story is Liz Cheney is going to get beat. That’s a foregone conclusion.”

National File's Frankie Stockes noted: "In a desperate effort to save her Congressional career and continue to target Trump supporters from Capitol Hill, Cheney is promoting early voting on Twitter, begging those eligible to straggle to the polls between now and Primary Day to support her.

"Though she now boasts quite the Democrat fan base, just a few short years ago, Liz Cheney’s father, former Bush Administration Vice President Dick Cheney, was widely considered a top public enemy by many on the Left, who frequently called for his execution as a war criminal over the U.S. invasion of Iraq and the multitude of other interventionist military operations he supported over the years. Now, Liz Cheney stands arm in arm with Democrats in calling for increasing American involvement in the ongoing conflict between Russia and Ukraine."

A recent visit by CNN to an annual rodeo event in Wyoming found widespread opposition to Cheney among attendees, many of whom said they planned to vote against her.

“Are you planning to vote for Liz Cheney?” CNN’s Randi Kaye asked Wyoming voter Sharon Tuggle at the Frontier Days rodeo in Cheyenne, according to The Daily Wire.

“Hell no. She’s done us dirty,” Tuggle said, confirming to Kaye that Cheney lost her vote because of her part on the January 6th committee. “Look at how she’s done Trump.”